Basketball: Oman is headed to NDSCS

Austin senior Oman Oman fulfilled one of his basketball goals when he played in the Minnesota Class AAA state tournament this past winter and now he’s accomplished another big goal.

Oman recently made his commitment to play college basketball under a full athletic scholarship at Division I NJCAA North Dakota State College of Science in Wahpeton, North Dakota. The Wildcats have racked up 30 conference championships, 21 regional championships and they’ve made 10 national tournament appearances in program history.

Oman will be following in the footsteps of Austin grad Gach Gach, who recently finished a solid two-year run at NDSCS.

“I like their playing style and I had a good time playing with them when I went up for a visit,” Oman said. “It was a big goal [to play college basketball]. I’m kind of proud that I accomplished it and it’s out of the way, but I’ve still got work to do.” 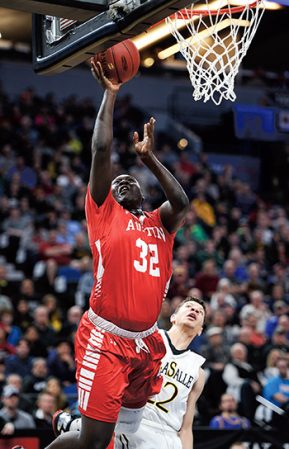 Austin’s Oman Oman gets a layup in the second half against DeLaSalle in the Class AAA Minnesota State Boys Basketball Tournament championship at Target Center. Herald File Photo

Oman averaged 8 points, 4.8 rebounds, 3.3 assists, while shooting 46 percent from the field and 42 percent on three-pointers for the Packers, as they finished second in the Class AAA state tournament this past season. He drew interest from Iowa Central Community College, Riverland Community College and Rochester Community and Technical College.

Oman will likely play power forward or center for the Wildcats, who went 31-2 overall this past season, and he’s ready to take the next step in his basketball career.

“It was pretty important [to find a winning team]. We did well here and we won a lot of games. I want to keep that winning streak going there,” Oman said of playing with the Packers. “I’ll have to get in shape and get ready for that toughness at the college level.”

“All of us love playing basketball. It’s kind of a job for us,” Oman Oman said. “Every day we’re either going to the Y to play or we’re trying to get into the gym at the high school.”