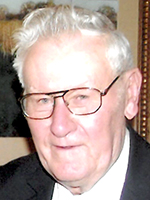 Arnold “Arne” was born on May 23, 1925, to Frederick and Mildred (Myster) Wiese in Vernon Township, Dodge County, Minnesota, near Oslo. On June 4, 1946, Arne was united in marriage to Esther Simonson at the Evanger Lutheran Church near Sargeant, Minnesota. The couple made their home on a farm for a couple of years before moving to Hayfield, Minnesota. After leaving Hayfield they resided in Blooming Prairie, and later Austin, Minnesota, before returning to Blooming Prairie in 1958. Arne did many things in his working life. He farmed for a time as a young man, worked for the telephone company in Blooming Prairie, the Blooming Prairie Creamery, and later for Harpo Chevrolet in Blooming Prairie as a mechanic. For many years, Arne and Esther provided cleaning services for several businesses including Farmers and Merchants State Bank, U.S. Post Office, city of Blooming Prairie, library and police department. In retirement Arne enjoyed his part-time work at the Prairie Manor Care Center in Blooming Prairie. He was a long-time member of First Lutheran Church in Blooming Prairie. Arne and Esther were also long-time members of the Sons of Norway and were fortunate to have made two trips together to Norway. He loved the outdoors, especially fishing and hunting, and passed that passion on to his children and grandchildren. Arne was an excellent marksman and earned many awards in shooting competitions. Arne also enjoyed old time dancing, country music, family camping trips, and time spent with his family.  He will be greatly missed by family and friends.