A musical journey; Big 9 Music Festival is just another step in music futures 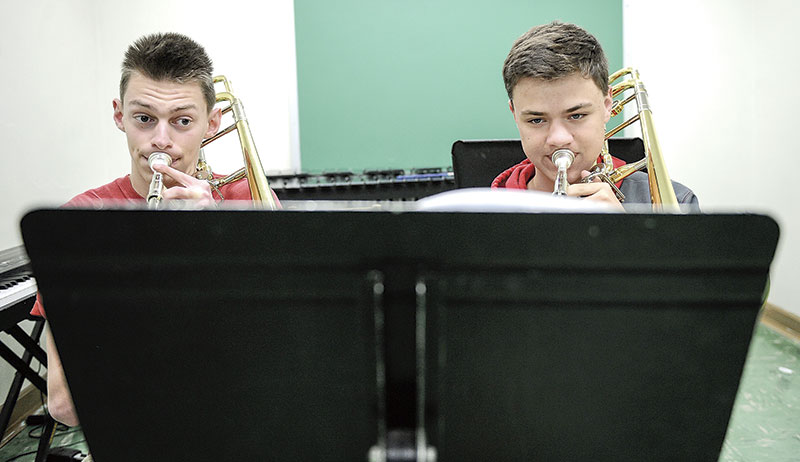 Austin High School seniors Arn Huizinga and Todd Weaver see the upcoming Big 9 Music Festival on Friday as “a kind of beginning of the end,” said Huizinga, to their high school music careers.

“This is the event that kind of starts the spring season of concerts,” he explained, and each one this year will be their last.

This pair — both trombone players who excelled in their performances throughout high school — will not be sad, however; they will both continue to pursue their love of music, although in different ways.

Huizinga, 18, will major in music performance, specifically in jazz trombone, at a college he has yet to pick.

Weaver, 19, will not pursue a music major — he will be an engineering student at Texas A&M University — but will be a member of the Aggies Marching Band, he said.

Both are veterans of the Big 9 Music Festival, which draws the best of the best musicians in band, orchestra and choir. They will be critiqued by guest clinicians who, this year, include orchestral clinician Steve Amundson of St. Olaf College; band clinician John Stewart from the University of Wisconsin-Eau Claire; and choral clinician Frank Watkins, also from the University of Wisconsin-Eau Claire.

While the critiques are helpful, both agreed, the festival provides “a fine line between competition and showing off to other schools,” said Huizinga, with a laugh.

“We don’t usually get much of an opportunity to see other schools play,” Weaver said. “This is a chance to do that.”

Both are part of the select band chosen to perform, along with the “selects” from orchestra and choir, at the evening honors concert. They will, in short, go out on top.

Their paths to music aligned early. Weaver moved to Austin from Tennessee when his dad took a job at Hormel; Huizinga came to Austin from Hollandale. Neither had a circle of friends until they met one another in band when they were sophomores. Both were inspired in their musical pursuits by former band director Bradley Mariska.

“His passion, his love of music, really drove me,” said Weaver.

But they said all directors they’ve had at Austin High School, and its staff and students, have shown major support for musicians. Austin has a long history of musical excellence, they said, and it shows.

“The music program is very important to people in the community,” said Huizinga, and he said he was happy for the many friends made in the ensembles.

Weaver said he was impressed when an Albert Lea church asked if there were Austin musicians who could play for Palm Sunday and Easter services.

“That told us Austin really had a history,” Huizinga agreed.

Memories will be many and they are good ones, they said.

Both said they would remember playing with the jazz ensemble at the VFW in Austin (“The room was filled!” Huizinga said), or when the band was able to play “New York State of Mind” while standing in Times Square, during a New York City trip as sophomores. 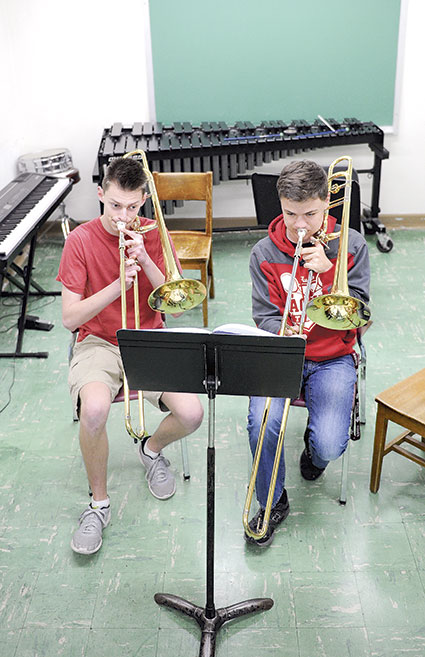 Music students from Austin High School will travel to Red Wing for the Big 9 Music Festival, where more than 2,000 music students from 12 high schools in southeastern Minnesota will celebrate music, be critiqued by instructors and musicians and learn about the music field.

This year, the festival will include something new, called “Find Your Place in Music.” Mike Aturi, drummer for the Rock ‘n’ Roll Hall of Fame inductee band The Lovin’ Spoonful, is devoting his life’s work to helping young musicians understand and explore their options beyond the stage. Since moving from to Red Wing in 2012, he founded the Universal Music Center.

Aturi will speak about career possibilities in music — from manufacturing, to education, to production, to retail. The festival will also feature vendors from various non-performance music fields helping students understand their options.