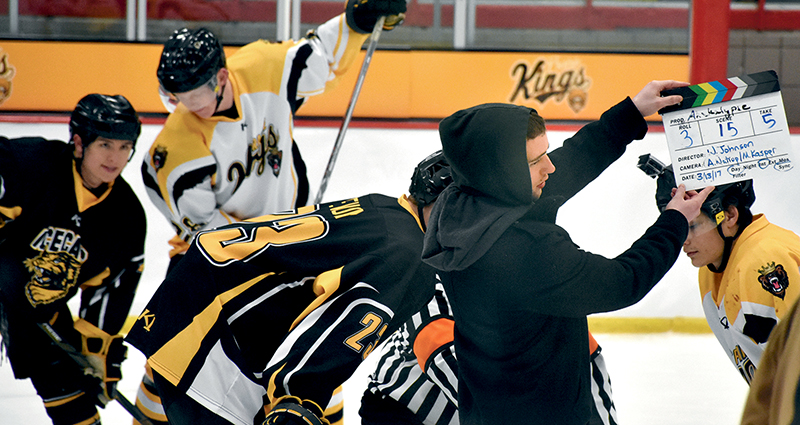 Bruins players get ready for action -- this time for a movie, not for the scoreboard. The Bruins are playing the fictional Ice Cats and the Prairie Kings for the movie "Ahockalypse," part of which is being filmed at Riverside Arena in Austin. Photos by Deb Nicklay/deb.nicklay@austindailyherald.com

The Prairie Kings hockey team took on its archrival, the Ice Cats, at Riverside Arena on Monday afternoon. After an impressive drive with the puck down the ice, the Kings scored a goal and celebrated. 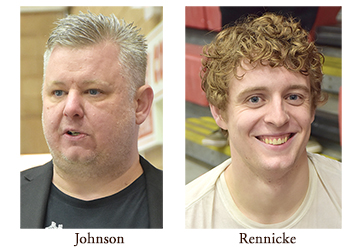 The Prairie Kings is the fictional hockey team in the upcoming independent zombie horror-comedy film “Ahockalypse.” Members of the Austin Bruins portray both the Kings and the Ice Cats. Although no zombies were filmed Monday, they are soon scheduled to take over Riverside Arena.

“Zombies have been done, but not with hockey,” said Bruins co-owner Craig Patrick. Patrick, who has done work on other films such as “Ibiza Undead,” “Heretic,” and “Black Creek,” co-wrote “Ahockalypse” because he wanted to do a zombie-hockey comedy for some time. “I thought it would be fun for the fans.” 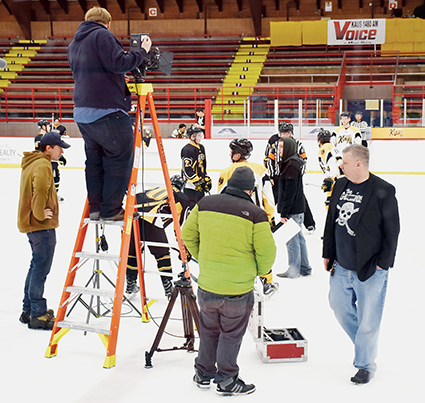 The scene on the ice while filming “Ahockalypse” at Riverside Arena. The hockey-zombie movie is using the talents of the Austin Bruins — and a lot of actors — in the film.

“I like the idea of combining the zombie genre with hockey,” Johnson said.

Johnson said he has had a great time shooting in Austin.

“Craig reached out to me and said he had a team and an arena to shoot in,” he said. “We got a nice reception. The people of Austin have been cool.”

The film has also been shot in other locations throughout Minnesota and Wisconsin. 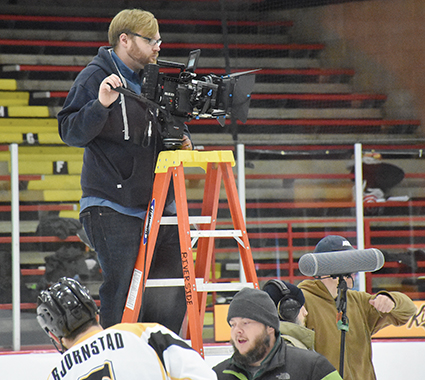 The cameraman readies for another scene of “Ahocklypse” at Riverside Arena. The Austin Bruins are providing their athletic ability to the film.

“He’s the responsible one of the group,” said Rennicke, who is appearing in his first feature film.

Johnson and Patrick picked Rennicke, a commercial actor who originally read for another part, for the role almost instantly.

“He had the look and voice of Jonesy,” Johnson said.

As for starring in his first movie, Rennicke said, “I’ve had a blast. It’s been really fun.”

The call for extras attracted locals and others from the surrounding area.

“I saw a notice about it on Facebook,” said extra Daryl Hrdlicka. “My family and I have been extras in other local movies and it’s just something fun.” 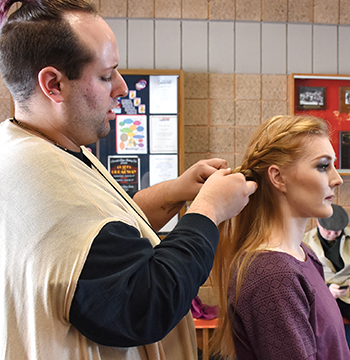 Tanner J of St. Paul works on Gabrielle Arrowsmith’s hair in her transformation for the film, “Ahockalyse,” filming at Riverside Arena.

“I like hockey films,” said extra Ajuawak Kapashesit, who has been in other hockey films. Kapashesit also heard about the casting call on Facebook, saying, “I wanted to meet some actors and get back on the ice.”

Both Patrick and Johnson are hoping to have the film finished in time for the 2017 London FrightFest Film Festival in August. If not, they hope to have it ready for the American Film Market in Santa Monica, California, this November. 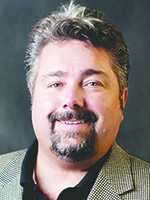 Patrick and Johnson are hoping “Ahockalypse” will be shown in movie theaters throughout the nation.

“As an independent film, there is a challenge of getting it known,” said Patrick. “Social media is a big part of that.”

“Ahockalypse” is scheduled for another shooting date on March 20 at Riverside Arena and a March 26 shoot in the streets of Austin.