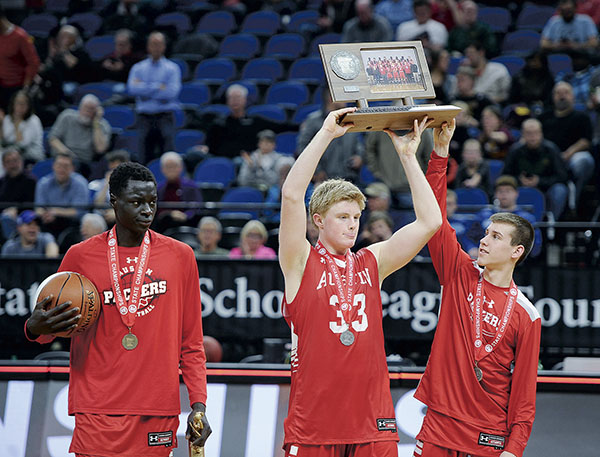 Packers knocked off by Islanders in state title game

The Packers lost to DeLaSalle in the Minnesota Class AAA state title game for the third time in the last five years as the Islanders captured their sixth consecutive Class AAA crown in Target Center Saturday. DeLasalle won the game 72-44. 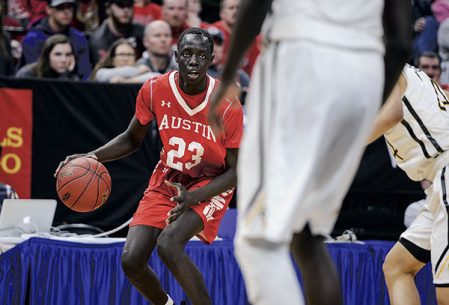 Austin’s Duoth Gach works around the perimeter during the first half against DeLaSalle in the Class AAA Minnesota State Boys Basketball Tournament championship Saturday night at Target Center. Eric Johnson/photodesk@austindailyherald.com

Austin (29-3 overall) struggled out of the gates as it fell behind 17-4 to open the game, but it clawed back to within 29-23 when Tate Hebrink hit two free throws with a minute before halftime. The Islanders (27-3 overall) had a big response as they scored the last two points of the first half and the first 10 points of the second half to go up 41-23.

“They’re just on a different level than we are,” Austin head coach Kris Fadness said. “I thought coming in that we were ready and we could handle them. I was wrong. This game’s on me more than anybody else or anything else because I did not have us ready for that. The switching of the screens and the physical man-handling of us on the court was an issue. I didn’t feel we were strong enough to deal with the pressure. We didn’t handle some of the bumps out there very well and we had trouble making a pass.”

Goanar Mar had a huge impact on both sides of the ball for the Islanders as he racked up 28 points, 11 rebounds and three steals. Mar also created a lot of deflections in Austin’s passing lanes.

“You’ve got three guys out there who are going to be Division I basketball players for sure and you’ve got other guys who might be good enough defensively at that level,” Fadness said. “Goanar was an absolute monster. We couldn’t throw the ball around him.”

Both Gach finished with 14 points on 6-of-8 shooting for the Packers and he temporarily brought them back in the game when he hit a pair of three-pointers to close the gap early on.

“They’re a good defensive team and it was pretty difficult to pass on them,” Both said. “Every time we thought we were coming back on them, they responded.”

Austin had trouble creating its offense against the Islanders’ quick defense and it also had trouble getting inside the paint. Oman Oman had four points and three assists in his final game as a Packer and he said things were tough.

“They’re pretty strong strong inside. They kind of created havoc for us,” Oman said.

Austin will graduate six seniors from this year’s squad and Fadness was pleased with what this group gave him.

Both Gach, Duoth Gach and Oman Oman were selected to the Wells Fargo All-Tournament Team. 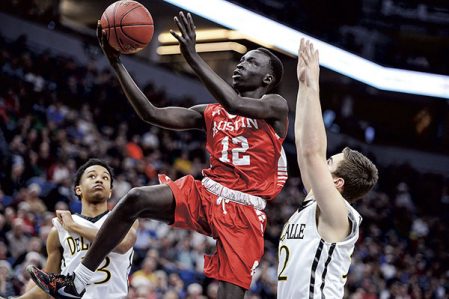 APS earns top honor in digital school survey; Schools honored for their use of technology

For the second year, Austin Public Schools earned the distinction as a top 10 school in the national Digital School... read more