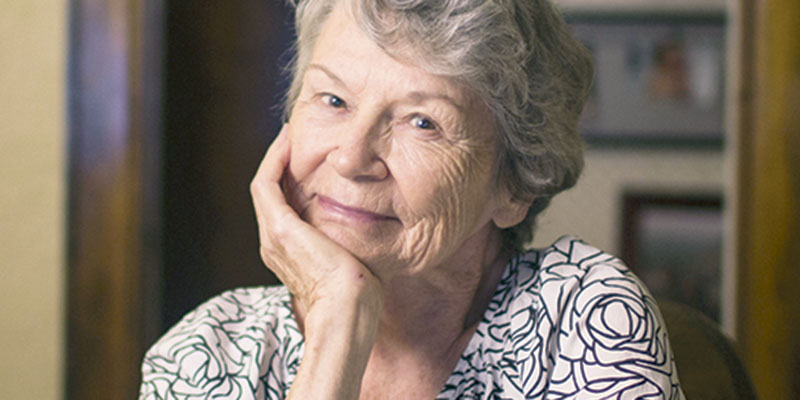 Faith Sullivan will be visiting Austin in April. Photo provided

Faith Sullivan recalls sitting within the circle of a book club while living in Los Angeles some years ago, when someone posed the question: “What author do you turn to in times of trouble?”

At first, she thought of how she had been reading Dostoyevsky’s “Crime and Punishment” when she was breaking up with her college sweetheart.

But the darkness of that story would hardly be the author she would turn to today, she thought.

And then, sometime after, “I picked up my first [P. G.] Wodehouse.” She, quite simply, fell in love with the British author. So, in her novel, “Good Night, Mr. Wodehouse,” she gave her heroine, Nell, “a Wodehouse to get her through the hard times.”

“Good Night, Mr. Wodehouse” is this year’s Page Turners selection for the city-wide read and Sullivan, who lives in Minneapolis, will be speaking at the Austin Public Library on April 20.

Her enthusiasm for her craft and the writing fraternity has not dimmed over her 80-plus years. She sounds as excited about emerging authors as much as her Minnesota literary ancestors, F. Scott Fitzgerald or Sinclair Lewis.

That love began early, in the characters in the books her mother read to her.

She recalled with a chuckle when she was in high school and hearing Shakespeare being read.

“I had the most bizarre feeling,” she said. “I thought, ‘Someone is telling my story!’ “ She discovered later that when she was very young, her mother had read to her from Charles and Mary Lamb’s “Tales from Shakespeare.” She had absorbed stories so completely she believed the story she was hearing — “Julius Caesar, I think,” she said — was one of her own.

She was born in a rich tradition of storytelling, she said, growing up in Lakefield, Minnesota, a small community in the southwestern corner of the state. Her family later moved to Pipestone.

“I grew up in my grandmother’s house; my great-grandmother was just kitty-corner across the street. There weren’t a lot of men around,” but there was a circle of smart and caring women.

“We’d sit around, my cousins and I, and listen to them talk; listen to their stories; oh, it was a wonderful place to grow up. I grew up knowing that women can be strong by themselves,” she said.

She began her journey to authorship in her 40s, after her children were grown. The publication of her first book stunned her. Her first forays into writing were for book reviews and such; she also taught school. But when her husband, theatre critic Dan Sullivan, was recovering from surgery, he had an “aha!” moment that changed her life.

“He said, ‘Wouldn’t it be fun to write a stage mystery?’”

The Sullivans had already written scripts for Dudley Riggs Brave New Workshop in Minneapolis. But this was different.

“Every little theatre group wanted one [mystery] because there are so few of them,” she said.

While the mystery play never materialized, an idea for a new book did.

“I never, ever thought I could write something; I thought at first, ‘Well, I’ll just write three or four chapters,’” she said.

Dan hauled “what had to be a 200-pound Underwood typewriter” to the apartment, taken from The L.A. Times, where Dan worked at the time, when the company began to transition to electric typewriters.

“I must have written the first book eight times,” she said with a laugh. “I’d get so involved in my characters. Dan finally took it away from me. He said, ‘You could be doing this forever, and never get published.’”

The result was her first novel, “Repent, Lanny Merkel.”

“Oh, my dear!” she exclaimed. “Publishing your first book is so much more exciting than having a baby! I hear other authors saying they might start to write something and it just doesn’t work out, so they stop. I cannot imagine that — I become that deeply involved. I would never stop in the middle and walk away — it would be like abandoning your children.”

Since then, she has written nine books; a book tentatively entitled, “Ruby and Roland” is underway.

“Good Night, Mr. Wodehouse” is an homage to women who prevail despite life challenges. Like the women in Sullivan’s family, Nell Stillman faces adversity but finds herself stronger than she believed. She soldiers on, raising her child after her husband dies; her son faces post-traumatic stress syndrome after his service in war. Throughout all of it, Nell finds comfort in reading — from Mark Twain to Jane Austen and, of course, P. G. Wodehouse — to “provide a cushion,” she says in the book.

The book took her 10 years to write. Unlike her previous books, the 60-plus year span made her particularly careful to make sure history and the narrative “moved forward together in a meaningful way.”

The Star-Tribune in Minneapolis found it a good mesh: “Good Night Mr. Wodehouse” (is)  “… small-town life through the eyes of an intelligent, generous narrator who fights off gossip, pettiness and tragedy with compassion, perseverance and forgiveness. Who wouldn’t want to spend a late-summer afternoon or two in the company of such a person?”

Sullivan’s own “cushion” of reading comfort is made of diverse fabric. She enjoys British authors — in addition to Wodehouse, she counts Graham Swift and Ian McEwan (“Just fantastic!” she says) among her favorites — as well as fellow Minnesota author Louise Erdrich. Oh, and there is Kent Haruf whose novel, “Our Souls at Night,” she applauds enthusiastically (“A beautiful little book!”) And then there is “The Hare with the Amber Eyes” (by Edmund de Waal, which “absolutely knocked me out,” she said) and, of course, F. Scott Fitzgerald and Sinclair Lewis … the names tumble like water until she cannot name them fast enough.

She stops and laughs.

“You can either be alone or, you can read; there are so many wonderful books out there,” she said.

And, always, there is a Wodehouse, just waiting.

“I always have a Wodehouse on my night table,” she said, firmly. “Always.”