Faith Sullivan said she sits at the anecdotal feet of her maternal forebears when writing about strong women. 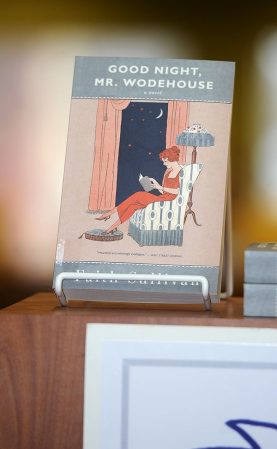 However, she stands toe-to-toe with British author P.G. Wodehouse on the soulmate front.

So enamored was she of the British author of the Jeeves and Wooster series that she had the leading character of her latest book, Nell Stillman in “Good Night, Mr. Wodehouse,” even correspond with the famed author.

Nell in the novel even includes in her (premature) obituary: “In 1909, Nell discovered P. G. Wodehouse, who became her treasured companion and savior. She recommends his books to all who know distress, And, of course, to all who don’t.”

“He was just such a delightful writer,” said Sullivan, during a recent phone interview. In fact, she added with a laugh, had Wodehouse been of her era, “I would have taken him right off the shelf.”

When she picked up her first Wodehouse novel, “I went through it like a bowl of salted peanuts,” she said. Although known for his light touch and witticisms, his plots are disarmingly complex, she said. It prompted her to be particularly careful when crafting her own mesh of history and plot for “Good Night Mr. Wodehouse.”

Wodehouse was a wildly popular British humorist whose comic characters of Bert Wooster and his valet, Jeeves, figured prominently in many of his books and short stories, as well as the characters in his series set at Blandings Castle. Initially trained as a banker, Wodehouse switched to a career as a writer. He gained fame in the 1920s musical theatre and then with his books featuring his characters, Jeeves and Wooster — a popularity that lasted throughout his life. He lived in America after World War II and continued to live there until his death, at 93, in 1975.

Wodehouse’s popularity in the U.S. waned for a time, “but I think he’s coming back,” Sullivan said, thanks to the BBC, which has produced Wodehouse-based series, including the TV series, “Jeeves and Wooster,” and the more recent, “Blandings.”

“I think that has introduced Wodehouse to a whole new generation. Thank goodness.”