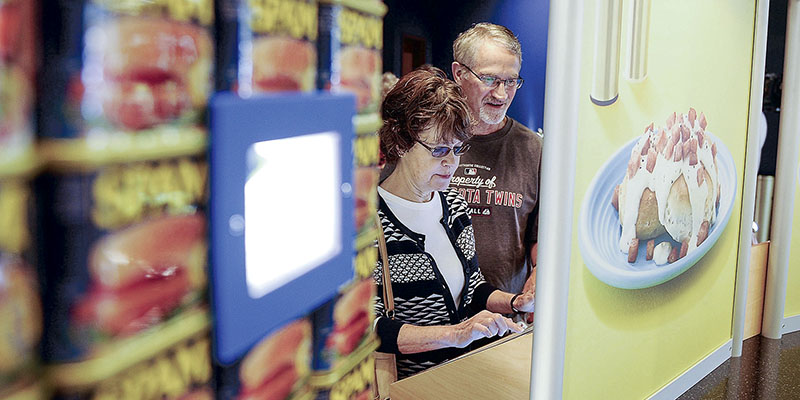 Gary and Meridee Ofstedahl interact with one of the displays at the Spam Museum following the grand opening ceremony in July 2016. Herald file photo

The SPAM Museum earned the Award of Merit in the Attraction of the Year event on Jan. 31 at the 2017 Explore Minnesota Tourism Conference held in St. Paul, an annual gathering that recognizes contributions to the state’s $14.4 billion travel industry.

Its content, visual attractiveness, attendance numbers, activities and marketing, all combined to make the museum a top contender for the award, only one of three top attraction awards given in the state. The museum was selected by an independent panel of judges, said David Bergman of the Explore Minnesota Tourism.

Other awardees included the Glensheen Mansion in Duluth, which earned the Award of Excellence, and the Fagen Fighters World War II Museum in Granite Falls, another Award of Merit winner.

The judges collaborate on their selections and study an application for its data and thoroughness. Some of the comments about the museum were its “strength and impact on downtown activity,” and “the development of vitality … (that it helped to spark) in the community.”

Still other judges noted the nice design and visuals the museum had created, and was impressed with the number (over 100,000 when the application was made) clocked in attendance in a short amount of time.

Nancy Schnable, director of the Austin Convention and Visitor’s Bureau, said the award cannot be understated for its impact. The extensive application for nomination came from a partnership of community members, she said, who understood the museum’s impact.

“It is a key attraction in Austin … and with that kind of impact, we have a definite economic impact,” she said. “To be highlighted for such an award … makes us even more aware of how important the museum is to Austin’s vitality.”

In another category, Event of the Year, Lutsen99er and Lake Superior Storm Festival, both in Cook County, and Middle River Goose Festival, were all award winners. The Marketing of the Year Awards of Excellence went to Minne-Roadtrip, a multi-community branding effort featuring Faribault, Owatonna and Northfield; Otter Tail Lake Country Tourism Association and its video marketing campaign; Visit Bemidji and its new website; and Visit Winona, for its branding effort featuring videos.

The Spam Museum opened on April 22, 2016, just in time for Hormel Food Corporation’s 125th anniversary. It watched its 100,000th visitor enter the museum on Dec. 2. In observance of its one-year anniversary, the museum hopes to reach a goal of 125,000 visitors.