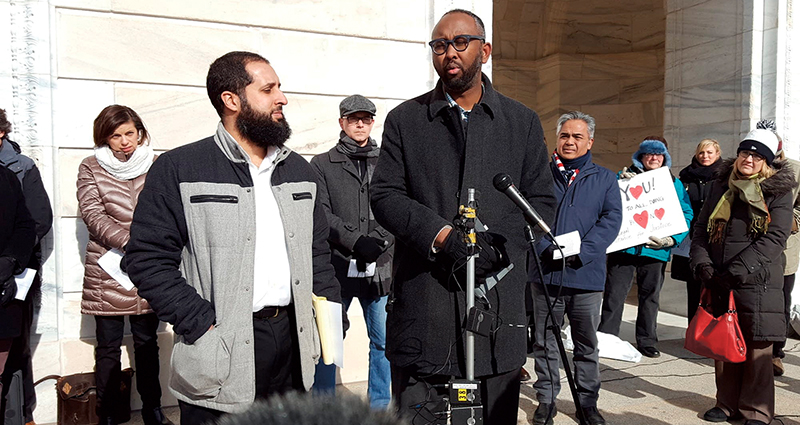 Attorneys gathered in St. Paul Thursday said that President Donald Trump’s approach to immigration is creating a crisis unseen in past administrations.

In below-freezing temperatures, dozens of attorneys stood outside the State Capitol and recited what’s known as the lawyer’s oath under Minnesota statute. It begins, “You do swear that you will support the Constitution of the United States and that of the state of Minnesota … .”

Kim Hunter, an immigration attorney with the National Lawyers Guild of Minnesota, said she had “always thought that the lawyer’s oath should actually be to comfort the afflicted and afflict the comfortable.”

Several dozen volunteer attorneys who have been assisting Twin Cities families affected by Trump’s immigration order applauded when she asked the crowd to “shut him down.”

“I was heartened when we had our open house to see a broad spectrum of Minnesota society coming in, and they were there for one thing,” he said. “They said, ‘We heard what’s been happening, and we wanted to know what we can do to help.’”

He said these were people from neighborhoods far beyond the Twin Cities.

“It was just people from the area who said they want to help, and that was uplifting,” he said. “And so thank you, Minnesota.”

After the speeches, John Keller of the Immigrant Law Center of Minnesota stepped inside the Capitol to describe what he and other attorneys have been experiencing.

“A lot of people, particularly in the Muslim community and the countries named,” he said — referring to Iraq, Syria, Iran, Libya, Somalia, Sudan and Yemen — “are calling with a basic fear about travel, about what will happen if they travel, about loved ones who are or were en route to the United States,” he said.

He said the immigration order is in flux and, depending on the airport, irregularly applied, so families don’t know what’s prohibited. And further executive orders are expected.

“With each one of these pieces of information, or leaked pieces of information, your very liberty, or your loved ones’ safety, if they’re abroad, or your future if you have to travel, being able to know you can get back into your new home — all of that causes a level of very normal fear and anxiety that I’ve not seen on this level, and this pervasive, in my 18 years of practice,” he said.

Keller said the effect of the president’s immigration order is harsher than people might expect.

“If people sat in my chair … and heard first hand individuals talk about a small child who can’t come, about an elderly parent who is sick and dying, who maybe has days or a week to live, and who you haven’t seen, but you’re too fearful to go because you won’t come back to the children you’d leave behind,” he said, “I know there would be a human connection, because we have the ability feel empathy.”

That empathy has meant an increase in membership for the ACLU of Minnesota, one of the organizations represented at the Capitol event. The organization’s former membership of 7,000 has more than doubled since Trump’s election.