Packers get past Mayo, will play at Rochester JM Saturday 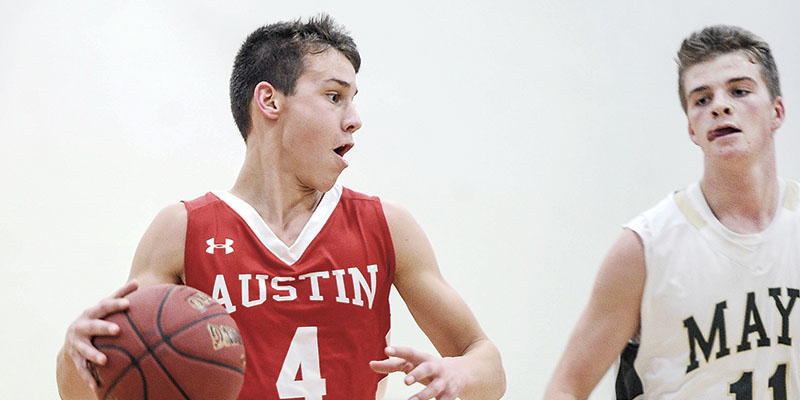 Austin’s Tate Hebrink heads to the hoop off the break during the second half against Rochester Mayo Thursday night in Packer Gym. Eric Johnson/photodesk@austindailyherald.com

The No. 7 ranked Austin boys basketball team didn’t have to do a lot of work in the half court set, but it was able to get out and run in transition as it beat Rochester Mayo 68-46 in Packer Gym Thursday.

Austin forced 20 turnovers and it was able to get out and run often. 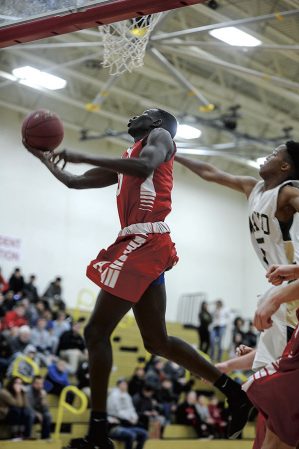 It was the first game of the week for Austin and it came two days before their showdown at Rochester John Marshall 7:15 p.m. Saturday. The Packers were able to keep their focus on Mayo before looking ahead.

“We knew the consequences going into it if we were to lost [tonight],” said Austin senior Kyle Oberbreockling, who had six points. “We knew we had to play these guys before we played JM and we knew the importance of this one.“

Both Gach had 15 points, six assists and four steals for Austin and he helped the team get going by sharing the ball early on.

The Packers looked to be in control when they led 41-11 early in the second half, but Mayo’s Trajan Grimsrud caught fire from behind the arc and the Spartans (2-8 overall, 1-5 Big Nine) were able to get as close as 59-41 in the second half.

“They’ve got a very good point guard in the Grimsud kid. I was worried about him going off like he did in the second half and thankfully he didn’t do that all game,” Austin head coach Kris Fadness said. “I wasn’t really happy with how the last seven or eight minutes went. Our guys have got to learn to play with a little bit more respect for the game. We got carried away with trying to run out and get dunks every time. The dunks will come, but can we just stay focused and play every possession? That’ll be the mark of this team if we want to win any hardware.” 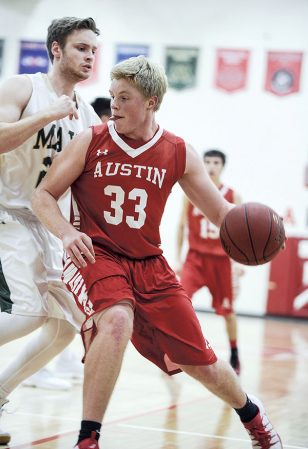 Austin will now look to a big test as it will take on the Rockets (7-3 overall, 6-0 Big Nine) in a battle for first place in the conference. Fadness said his team has the ability to compete with JM if it plays up to its potential.

Gach said the team is focused and ready to play in what will likely be a loud and hostile environment Saturday night.

“We’re excited for the game, it’ll be a big game,” Gach said. “We’ll have to talk as a team, keep up communication and play with energy.” 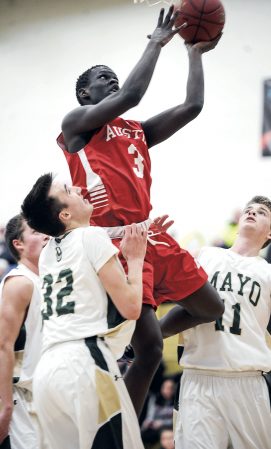 Austin’s Moses Issa goes up in traffic during the second half against Rochester Mayo Thursday night in Packer Gym. Eric Johnson/photodesk@austindailyherald.com