Packers find their spark against the Raiders 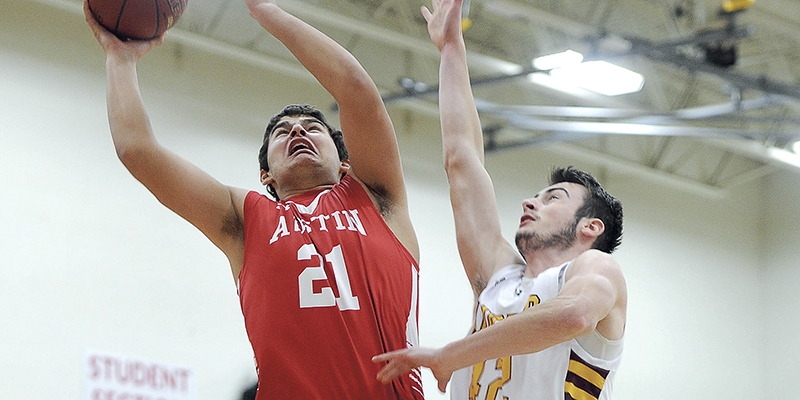 Austin’s Patrick Hagen goes gets a big shot underneath in the first half against Northfield Friday night in Packer Gym. Eric Johnson/photodesk@austindailyherald.com

You can’t start a fire without a spark.

Fortunately for the Austin boys basketball team, the Packers found that spark when facing their first double-digit deficit in the second half this season against Northfield in Packer Gym Friday night. 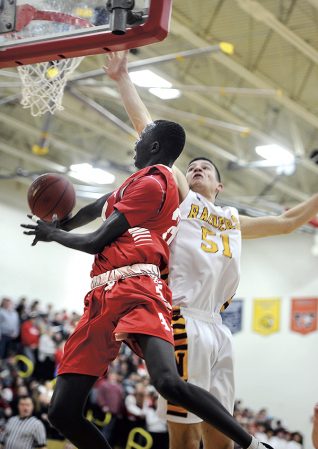 Austin’s Duoth Gach goes underneath in the first half Friday night in Packer Gym. Eric Johnson/photodesk@austindailyherald.com

Austin trailed 52-42 with eight minutes left in the game, but it was able to rally to a 68-60 win over the Raiders (5-4 overall, 4-2 Big Nine), who ended Austin’s season in the Section 1AAA semifinals last year.

“We just never want to get down on ourselves,” said Oman, who had 13 points, four assists and three rebounds. “We don’t want to doubt ourselves and we had to keep going. It just came to me and I took some shots. It was there.”

But Austin would score just four points over the next 11 minutes of the game as the Raiders stormed back into it. 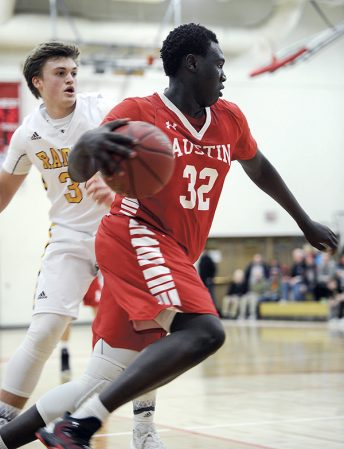 Austin’s Oman Oman leaves Northfield’s Hunter Koep behind on a spin move in the second half Friday night in Packer Gym. eric Johnson/photodesk@austindailyherald.com

“We had a lack of communication and we weren’t playing tough enough defense,” said Duoth, who had 21 points. “We just had to keep our heads up and move the ball. Shots would start falling down.”

Austin head coach Kris Fadness said the team’s offensive struggles were similar to the ones they faced when they had to fight out a win at Red Wing earlier this season. This time, the struggles came against an upstart Northfield team that was able to build up a 10-point lead.

“Nothing was going in. We were just out of whack for awhile there. They had us standing there in that zone for awhile and we couldn’t make shot. When you can’t get a score, we can’t get in our press,” Fadness said. “Defensively, we lost our minds for awhile. Guys were getting out of position on defense. You can’t start trying to get five points back every defensive possession.”

When the Packers needed someone to step up down the stretch, Fadness liked what Oman and Kyle Oberbroeckling gave him in the paint on the defensive end.

“I thought Obie and Oman really stepped it up defensively down the stretch,” Fadness said. “Oman never lacks confidence, but it was nice to see him make some big plays. His three was probably the shot of the game. I was really happy with Oman in the second half.”

Oman said the Packers were pumped up to play the Raiders, after losing to them in overtime at the end of last season.

“I definitely had this one circled. All of us did,” Oman said. “We were all talking in the locker room saying we had to get this one.”

Both had 13 points, three rebounds and eight assists for Austin. 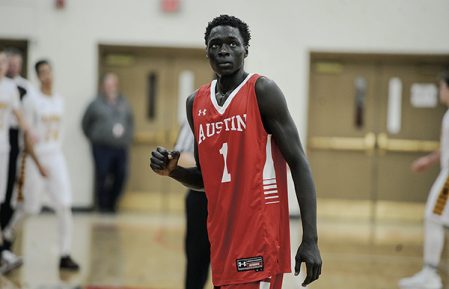 Austin’s Both Gach pumps a fist after the Packers closed out their 68-60 win over Northfield Friday night in Packer Gym. Eric Johnson/photodesk@austindailyherald.com