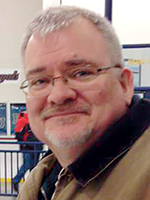 James Robert Bennett, 53, of Austin, Minnesota, passed away to be with the Lord Friday, Dec. 23, 2016, at his home in Austin surrounded by loved ones.

Jim was born April 27, 1963, in Austin, to Robert and Colleen Bennett. He grew up in Austin where he graduated from Austin High School in 1981. On Oct. 22, 1988, he married Kelly Tricker in Faribault, Minnesota. Jim owned and operated Old 218, formerly Roberts Specialty Company, with his father, Robert, and his two brothers, Joe and Tony.

Jim enjoyed watching his boys grow into the honorable young men they are today. He was always proud of their character and accomplishments. Jim was on the Austin Youth Hockey board for many years. He enjoyed listening to his sons play in band and spending time at the hockey rink watching his three sons play and referee hockey.