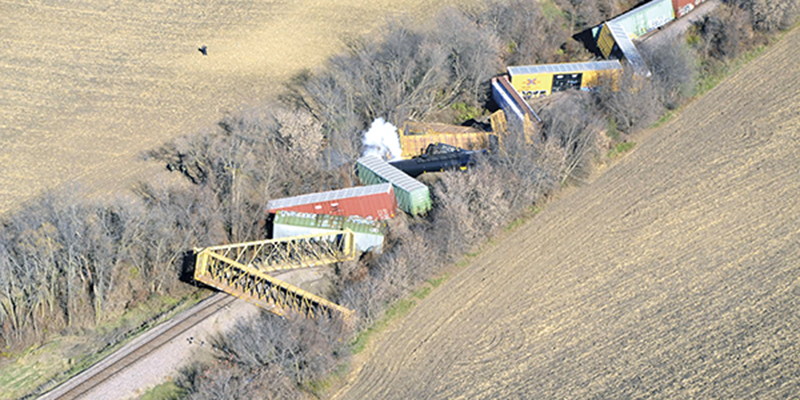 By Sarah Stultz and Sam Wilmes

ELLENDALE — Union Pacific Railroad officials and local first responders continued to work Saturday at the site of a derailed train about half a mile south of Ellendale.

One rail car in the 146-car train was reportedly punctured during the derailment, leaking liquid petroleum gas and leading to the evacuation of the nearly 700-resident community and other residents within one mile of the train on Friday morning.

With the exception of one homeowner within 400 feet of the incident — which was south of Ellendale near the crossing of 158th Street — all evacuated residents had returned home, according to the railroad company. The evacuation was lifted for those residents at about noon Friday.

Union Pacific officials said they planned to remove remaining liquid petroleum on Saturday from the punctured rail car and one other car using a vent and burn method. The liquid was slated to be released into a contained pit and then burned over the course of four to eight hours.

No additional evacuations were expected.

The company said most of the petroleum had been cleared from the single punctured car; however, the second derailed car contained the chemical, and due to its location in the derailment site, it was unclear if it was also leaking.

The train had four locomotives — two in the front and two at the back.

Information about why the train may have derailed has not been released.

Union Pacific stated non-impacted rail cars and locomotives were slated to be removed from the site while the response teams focused on the derailed cars containing the petroleum with the assistance of environmental management and air quality testing contractors.

About 20 agencies assisted with the evacuation of Ellendale residents and those within the one-mile radius of the derailment.

Steele County Sheriff Lon Thiele said a hazardous materials chemical assessment team from Rochester was called in to assist, along with the railroad’s teams.

Minnesota Highway 30 was also closed for a period, and NRHEG school district canceled classes Friday because there was no access to the elementary school.

Residents and first responders met at United Methodist Church in Ellendale as officials began investigating what had taken place. Volunteers from both the church and the American Red Cross fed breakfast to those evacuated and provided other help as needed.

Families could be seen huddled together in their pajamas in parts of the church, some of them having been woken up by the evacuation procedure. Adults took turns taking care of friends’ and neighbors’ children while some parents ran errands and checked up on others. Some residents at the church made phone calls to let others know they were safe, as a number of Ellendale residents had already left the town for their daily work commute before the evacuation took place.

Alma Short was with relatives Rosa DeLeon and Jaidyn Rubio, 12, at the church. Short said she heard what she described as the derailment earlier in the morning and said she could see it from her kitchen window.

“It’s a very close-knit community in Ellendale,” she said. “Everybody responded quick.”

According to Minnesota Public Radio News, federal railroad data show an average of six trains pass through Ellendale every 24 hours.

Data also show Union Pacific has reported 52 accidents classified as derailments from 2010 through August 2016, although none were in Steele County and it appears there is no recent history of problems in Ellendale, the news organization stated.

Banking on a win: Superlarks cash in against Flying…