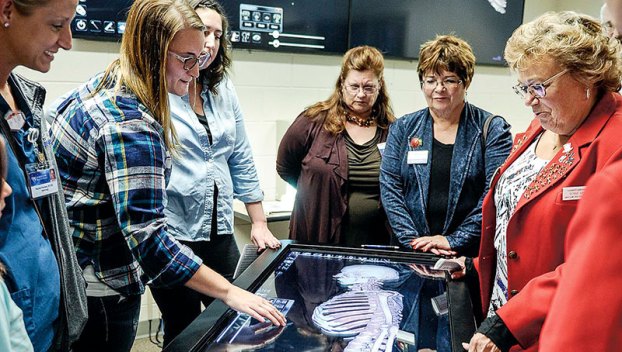 Bonnie Graff smiled and leaned in Thursday as she and other community leaders eagerly watched Riverland Community College students Ashley Sampson and Christi Rohlfing dissect Victor at the college’s west campus in Austin on Thursday.

But there was no blood, no breaking of skin and, as Rohlfing joked, none of the messes and smells that come with a real cadaver lab.

That’s because Riverland dedicated its $80,000 Anatomage Table, a virtual cadaver that allows students in the radiography and other departments to delve beneath the skin and explore the entire human body without using traditional instruments or an actual cadaver.

“This incredible tool allows us to visualize relationships within the skeletal system to recognize errors of positioning and gives us the power to critique what needs to be fixed — all without using any radiation,” Rohlfing said.

“We are constantly finding new things that the table can do,” she added. 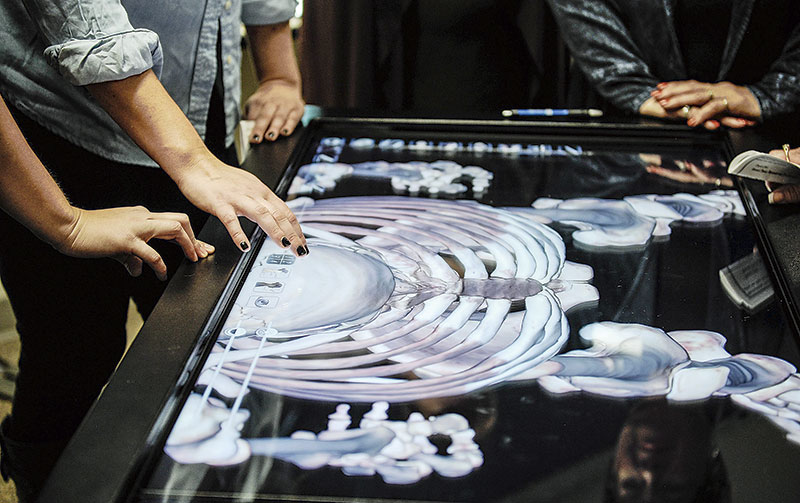 Ashley Samspon spins a 3D representation of the skeleton around as she demonstrates the Anatomage Table Thursday afternoon at Riverland Community College. Photos by Eric Johnson/photodesk@austindailyherald.com

Bringing an Anatomage Table to Riverland’s Austin campus was the brainchild of Sandra Sellner-Wee, the college’s radiography program director who first learned about the table at a conference.

“This has been a dream for about four years: How can I bring this technology to Riverland for all of our students to benefit?” Sellner-Wee said.

And more than 60 percent of the radiology technologists in Austin, Faribault, Albert Lea and Owatonna’s X-ray departments are Riverland grads.

“It is easy for a president to boast about a program like this, but it’s not my doing,” Atewologun said. “It’s the faculty and the students and the support staff that make this so.”

Graff and Mayo Clinic Health System employs many of the graduates across its clinics, and she said a few grads are working over in the Mississippi River corridor, and she said the need continues as a good portion of the workforce is starting to retire.

But it took help and effort from around the community to bring the Anatomage Table to Austin.

Dean for Institutional Advancement Steve Bowron spoke about how Riverland obtained the table when it didn’t have the operational budget capabilities to acquire it. The table was obtained through the help of many community partners and donors.

“We happen to have some incredible partners in our community,” he said. 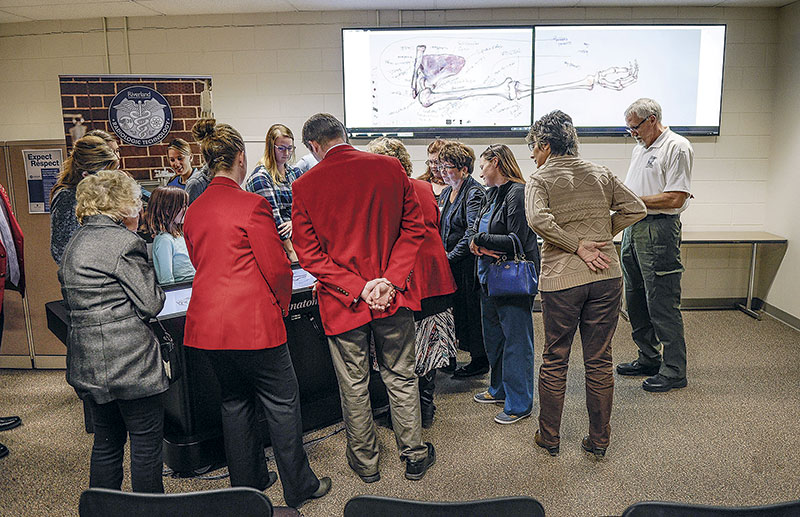 People gather around the Anatomage Table for a demonstration.

These included not only cash donations, but many of the groups donated materials, and some money was obtained through a state program to fund equipment purchases.

“That’s the kind of collaboration and partnerships that we enjoy with all of you, with our local community, to be able to do the level of best-in-class programming that we really aspire to,” Bowron said.

Riverland’s table was the first in Minnesota, Iowa and the Dakotas; however, Minnesota State University, Mankato got one last week, according to Sellner-Wee.

The table has given Sellner-Wee a new tool and a host of new opportunities to provide hands-on lessons.

“The possibilities are endless with this technology,” Sellner-Wee said. “Really, it’s only limited by our imagination, so we’re always finding something new.”

Students can rotate images 360 degrees, highlight and select specific bones or structures and see what’s going on beneath the skin to learn about human anatomy.  They also have two flat-screen televisions set up to show what’s appearing on the table.

Sampson described their summer class session as intense as they learned an “extremely overwhelming” number of boney anatomy structures but the Anatomage Table offered them the opportunity to see them in three-dimensional images, which helped with retaining what they’d learned.

“The table has helped us in more ways than we can county,” Sampson said. “The capabilities really do seem endless.” 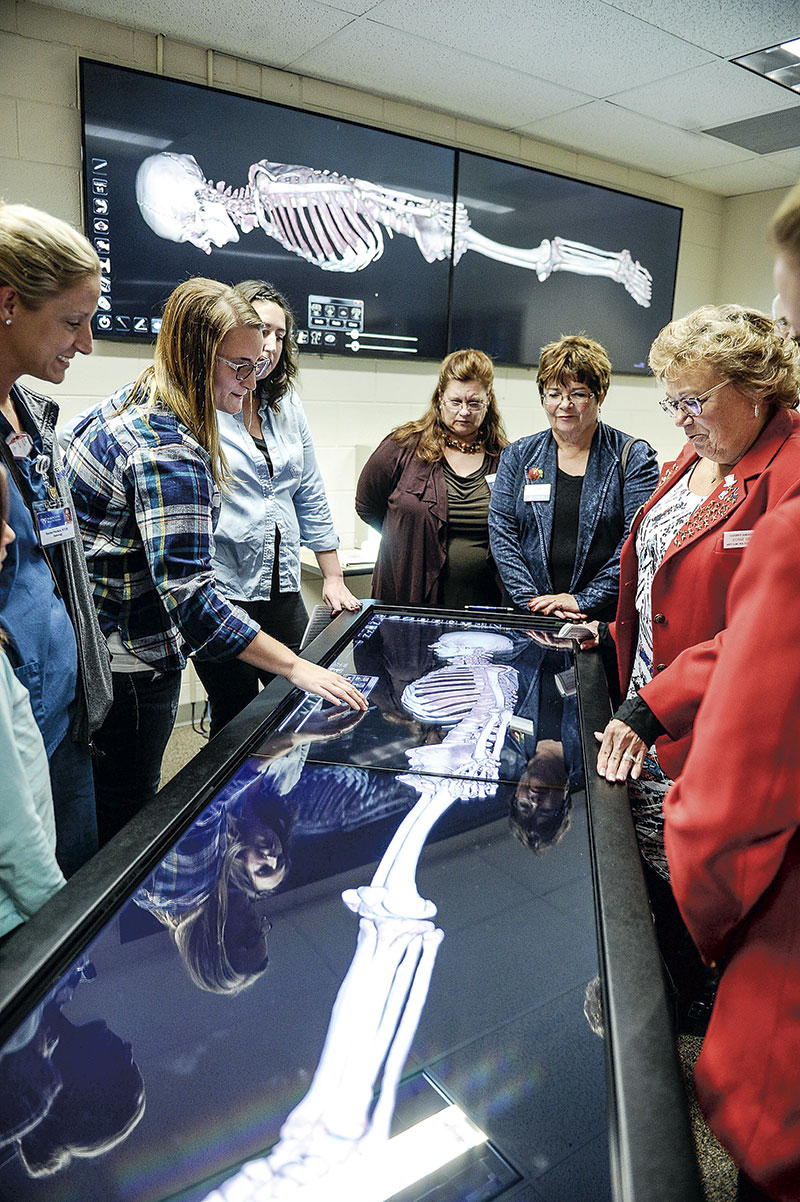 Rohlfing admits she’s a visual and hands-on learner like most in the imaging and sciences field. She spent some time in a cadaver lab, where she dissected human cadavers donated to science, which she described as the favorite part of her education because she was able to put lessons from the classroom into practice in a three-dimensional format, which they can now do with the Anatomage Table.

“This is exactly what the Anatomage Table does for us every class time, minus the horrible smell and mess of a real cadaver lab,” Rohlfing said, drawing laughs from Austin Area Chamber of Commerce, RCC and community leaders.

Rohlfing said the table engages the students, gets them out a traditional classroom lecture setting and has them engaged with teachers like Sellner-Wee to show what they’ve learned.

“It drives us to be active learners and breaks the stereotype of traditional classroom learning,” Rohlfing said.

Right now, the table comes with Victor and Vicky, a male and female cadaver, along with a dog and other animals, but more cadavers are being added to the system.

With about 200 animal images included, Sellner-Wee said RCC’s animal science classes, part of the ag program, will also utilize the table. Massage program students will also be able to use that to see how muscles and veins interact.

“With that, we can impact many students at the college,” Sellner-Wee said.

Class of ‘67 planning for 50th reunion