Margaret Ann Watson was born Aug. 2, 1923, in Oak Park, Illinois, the daughter of Clyde and Jenny (Conway) Watson. She grew up in Oak Park and graduated from Oak Park High School in 1941. Following high school, she attended secretarial school and later worked for the Chicago Motor Club, which eventually became part of the American Automobile Association. Margaret married the love of her life, Frank Williamson, in Oak Park on Aug. 10, 1944. At the time, Frank served in the U.S. Navy and commanders cut his ship’s leave short, leaving the new couple little time to plan or celebrate their wedding. In 1947, the couple moved to Lemont, Illinois, to follow Frank’s lifelong dream of being a farmer. They later moved to Sandwich, Illinois, to work for another farmer. Jill, the couple’s first child, was born there. The opportunity to rent a farm took the couple to Belvidere, Illinois, in 1950 and they bought a separate farm in that area in 1958. During their years in Belvidere, Margaret gave birth to their sons Terry, David and Mark. 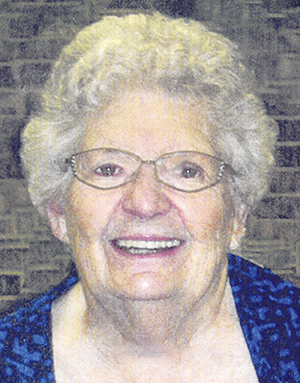 A larger farm in Waltham, Minnesota, became available for purchase and the Williamson family moved there in 1968. Upon moving to Minnesota, Margaret became a member of First Lutheran Church in Blooming Prairie and became very active in the congregation through teaching Sunday school and volunteering for other activities. Margaret continued to live on the Waltham farm until 1998, when she and Frank retired to a new home in Blooming Prairie. She was very happy in their new home and lived there until 2012, when she moved to Prairie Manor Care Center for health reasons. In her free time, Margaret enjoyed gardening and homemaking. Her family relished the special meals she frequently prepared and the desserts she lovingly baked. They also admired Margaret for her lifelong devotion to Frank and his dream to be a farmer, even though he was born and raised in Chicago. She was a city girl who became the perfect farm wife and allowed Frank to follow his dreams without ever complaining.

Funeral services will be held at 11 a.m. on Tuesday, Oct. 11, 2016, at First Lutheran Church in Blooming Prairie with Pastor Heidi Heimgartner and Pastor Charles Leonard officiating. Visitation will be held from 4 to 7 p.m. on Monday, Oct. 10, at the Worlein Blooming Prairie Funeral Home, and one hour prior to the service at the church on Tuesday. Interment will be in Grandview Cemetery in Austin. Condolences may be expressed to the family online at www.worlein.com.