She was born to Louis and Antoinette Boit in Dilworth, Minnesota, on July 5, 1916, (although she always celebrated her birthday on the Fourth of July). She was one of eleven children (seven survived into adulthood) raised in the city’s “Little Italy” neighborhood during the Great Depression. Under the influence of the Golden Age of Hollywood, Camille yearned to become the “modern” American woman she watched at the movies. She and her sister Pat claimed they were the first women to wear pants in Dilworth. It was the 1930s and the two teenagers thought the town could use a bit of glamour, so they purchased red and white wide-legged pants from a fashion catalogue and strolled downtown. When their father got word of the spectacle, he swiftly put an end to the display. 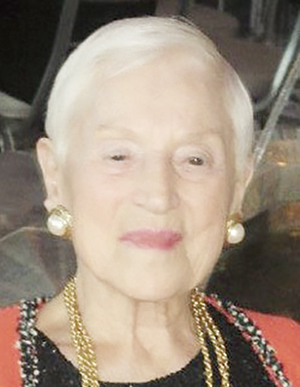 There was only so little hard-working parents could do to discipline seven children! As teenagers the Boit sisters would sneak out of their bedroom window and run across the yard with their heels and lipstick in hand. It was the height of the Jazz Age and they were set on catching rides to the Big Band nightclubs and ballrooms in Fargo, dancing through the night and sneaking back in before dawn. As a young girl Camille would sit on the banks of the swimming stream and watch the trains on the Northern Pacific Line, imagining the destinations of its passengers.

Following high school she headed for the Twin Cities, and after graduating from cosmetology college became employed as a manicurist at the St. Paul Hotel. She then travelled to Billings, Montana, where she became a buyer and designer of hats in the millinery department of the Hart-Albin department store. From there she ventured to Portland, Oregon, where she moonlighted as a cigarette girl and worked for the fashion retailer Nicholas Ungar, which was later purchased by Nordstrom’s. During World War II she volunteered making dressings and raising funds for war bonds. After the war she returned to Minnesota and married Walter (“Curly”) Becker in July of 1948 at St. Elizabeth Church, Dilworth. She had two children, Carla and Scott, and fulfilled her dream of owning a supper club — aptly named Curly’s. At the club she took great pleasure in greeting patrons nightly at the door with a string of pearls tied in a unique fashion, and developed an esteemed reputation as a businesswoman and club matron

through her ability to curate entertainment and dining. Curly’s drew in customers from all over, even attracting celebrities Peggy Lee, Phyllis Diller, Lawrence Welk and Bob Hope. The Becker’s moved to Austin in the late 1960s and opened a cocktail lounge, The Lantern, and later became proprietors of Paramount Liquors. She was a parishioner of St. Edward’s Catholic Church. She enjoyed cooking, baking, reading and following politics and current events. Camille embodied a true civic spirit: believing in the virtues of social, political and religious equality. She will be remembered by her family and friends as an all-American woman, truly ahead of her time. She is survived by one sister, Lorraine Tix of Sun Prairie, Wisconsin, daughter Carla Becker-Wyant of Austin, son, Scott (Julie) Becker of North Oaks; grand-children Carissa Wyant of Robbinsdale, Courtney Wyant of Austin, Cody Wyant of London, England, Jenna (Corey) Christensen of Victoria, Ellie (Connor) O’Neill of Arden Hills and Brett Becker of Minneapolis; one great-grandchild, Emmet Christensen and many nieces, nephews and great nieces and nephews across the country. She was preceded in death by her husband, Walter; parents; brother Jimmy Boit, sisters, Rose Knoll, Marian Mills, Patricia Gaustad, Gladys Masters and son-in-law James Wyant.

A private family gathering will be held to remember her. To honor her vivacious spirit, throw a party or simply show a random act of kindness.

A question of breaking away from establishment

In eighth grade at Hollandale Christian School, I served as a campaign manager for one of the two major political... read more