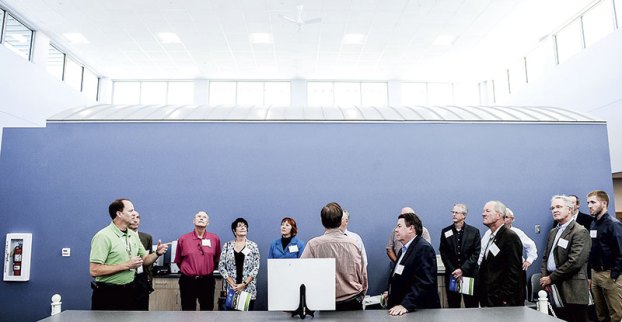 Community leaders and members of the public got a rare chance Wednesday to see the inner workings of the Austin Utilities’ new Austin Utilities Service and Operations Center, 1908 14th St. NE.

Austin Area Chamber of Commerce, community and utilities leaders gathered at the facility to tour and dedicate the roughly $17.5 million facility

“I think it’s a very important day for Austin Utilities,” Nibaur said. “Not only is the building done, but being able to actually show it to the community and what this structure looks like inside, how it functions, what the scope of our business really is. [It’s] part of that process of showing the facility and why it was needed here in Austin.”

The center consolidates Austin Utilities services and operations to one site.

Nibaur said his favorite part of the facility is that it flows well and is efficient for Austin Utilities’ 79 full time and 7 part-time employees.

The building was on time and and under budget.

“A great achievement for our staff,” Nibaur said.

Austin Utilities’ need for a new facility was significant, as Nibaur said it needed a building to consolidate office operations, including customer service, staff operations and administrative duties, from the former seven buildings utilities workers used to one central site.

For TKDA Senior Architect Peter Brozek, the project proved a fitting last project before he retires. He was praised for his work and dedication to the project, which he said was his best in 42 years on the job.

“It was fantastic,” Peter said.

But he said it’s not his building, he worked collaboratively with many Austin Utilities officials.

The public won’t see the secure parts of the building often moving forward, but people got a rare look inside on Wednesday.

A board and conference room will be a good space for training and meetings, and the facility features other meeting rooms named for the cities Austin Utilities serves: Nicolville, Austin, Lansing and Mapleview, according to Todd Jorgenson, the gas and water operations director who served as project manager for construction.

At the center front of the building is an administrative work room high ceilings, windows facing each direction and a vault built with a roof to allow for as much natural light as possible.

Natural light, functionality and a welcoming environment proved to be themes throughout the building.

Even the work hallways were designed with that thought in mind, as most feature solar tubes that pull natural light from the roof.

“For those long days in the shop, it’s nice to have some natural light,” Electrical Meter Shop worker Daryl Prihoda told a tour group.

The hallways even feature curved corners meant to be more inviting.

Even the finance office area featured some creativity, as windows were built between the office to allow for the staffers to talk when needed. 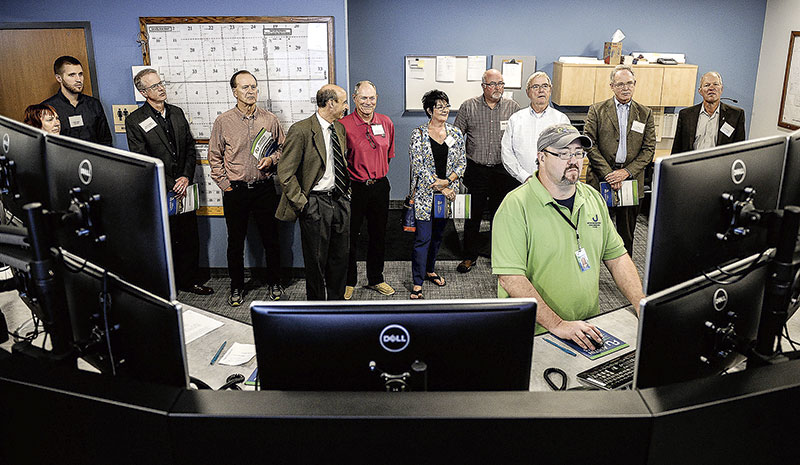 Most room and work areas are accompanied with sensors that turn lights on when there’s movement or turn them off after no movement is detected for two minutes.

When the building shifts from the office area to the work area, steel-shuttered doors can be closed. A portion of the building is built to withstand and F-2 tornado.

The operations area features areas for the crews to meet and begin their work days.

The dispatch center is staffed 24 hours a day and features an elongated desk that can be raised for workers to stand and work at 13 computer screens. There are also two flatscreen TVs on the wall in dispatch, and the building has 38 cameras.

A few doors back is an electric meter shop where workers test new and altered meters and document them before they go out.

At the back of the building to the east is a 39,000-square-foot garage for indoor parking, and the space feature in-floor heating through the building’s geothermal systems.

Along with a new site for welding operations, the utilities mechanic also has a much more room and more user-friendly equipment with a small lift for some trucks and a larger lift for utilities’ biggest trucks.

Benefit to be held for Austin firefighter

The community is coming together with the help of a popular band to support an Austin firefighter and his family... read more