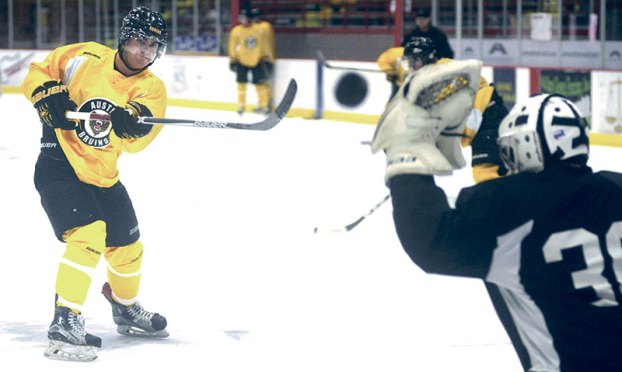 Preview: Bruins are ready to get back on the ice

A year after they were on the brink of advancing to the Robertson Cup, the Austin Bruins are ready to take that next step.

With head coach Kyle Grabowski in his second year at the helm and a few familiar faces back in the lineup, the Bruins are hoping to push through after they were knocked off by Bismarck in five games in last year’s NAHL Central Finals. 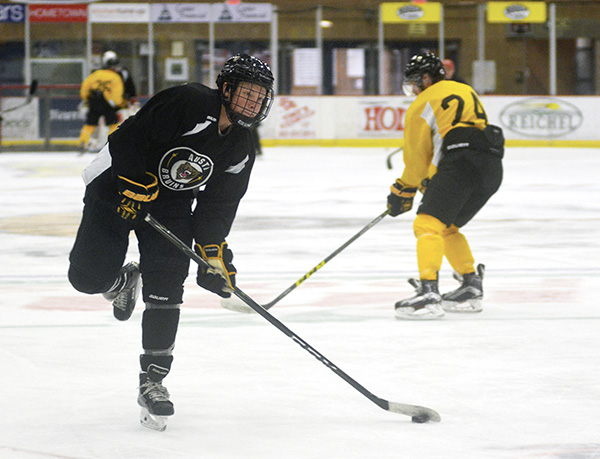 Jan Stefka, a second-year forward from Czechoslovakia, has already stepped up early on as he has a game-winning goal and five points in four contests.

“We want to be even more successful [than last year],” Stefka said. “Everybody wants to win and everybody wants to be the champion, but it’s hard and it’s a long ways away. We’ve got a great group of guys and we get along well.”

Austin (2-1-1 overall) started strong at the NAHL Showcase as it picked up a pair of wins and both of its losses were by one goal. Grabowski said it will take some time to figure out exactly how the team will look this season.

“It’s early right now and I think any coach will tell you that they’re not working with a polished product, even with returners,” Grabowski said. “We’re going to go through that first 10 game phase of the year where the kids are learning the system.”

Austin doesn’t have a lot of big bruisers in the lineup this season, but the Bruins are hoping to use their speed and skating ability to control the puck and attack the defense.

This year’s team has a lot more returning NAHL experience than last year’s squad and Grabowski said that even the new players have stepped up as leaders. 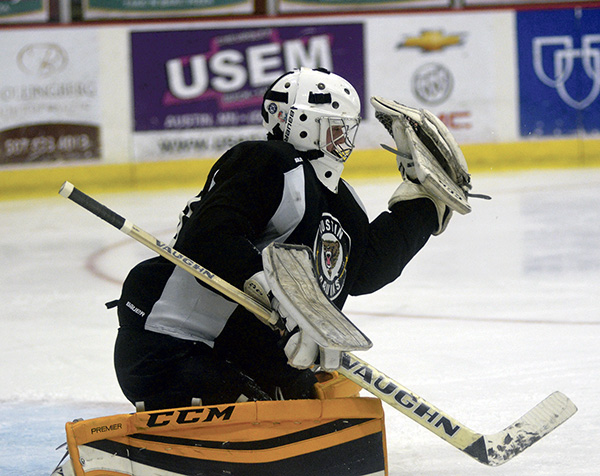 Robbie Goor makes a save in net for the Austin Bruins in practice in Riverside Arena Tuesday. Rocky Hulne/sports@austindailyherald.com

“We expect to be a good team. I think there’s a lot to be said for coming back with an established culture rather than starting from scratch,” Grabowski said. “The veteran players know me, they know each other and they know the way we want things done. Now that we have built that foundation and you’re a new guy coming in, you’ve go to do what that culture says. You need to follow the way of the Bruins.”

Rochester native Logan Haskins, who had one goal at the Showcase, said the Bruins are much further along at this point of the season than they were last year. Haskins and the Bruins are ready to rally together and make some noise this winter.

“We’re just excited to improve every day. We’ve got a lot of speed in our lineup and we’re a high energy team,” Haskins said. “We beat a few really good teams at the showcase and that shows what we’re capable of this year.”

The Bruins will play at Bismarck 7:15 p.m. Friday and Saturday.  Austin’s home opener will be against Bismarck in Riverside Arena 7:15 p.m. Oct. 14.

The Austin girls soccer team got off to a slow start and it couldn’t get back in the game as... read more