After being extradited to Colorado in July, an Austin marijuana advocate who previously organized Austin’s Hemp Fest pleaded not guilty to fifth-degree drug possession in Mower County District Court Thursday. 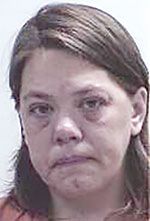 Deanna Jean Ryther, 42, appeared back in Mower County court after being extradited in July to Colorado, where she faces possible charges of felony first-degree tampering with a witness.

Ryther was issued a court order from Boulder, Colorado, on May 20 to turn over evidence after she claimed she had on Facebook pertaining to her father’s 2006 sexual assault conviction.

She was also ordered to cease and desist harassing the victim of that assault, but she did not stop and an arrest warrant was issued.

On June 23, Mower County deputies executed a search warrant and felony arrest warrant from Colorado for Ryther, according to court records.

In addition to evidence pertaining to Ryther’s crimes in Colorado, deputies also found and seized 80 grams of marijuana, an unknown brown substance, marijuana oil/wax, several packages that were mailed from Colorado containing vacuum sealed bags that appeared to have been used to send marijuana and related products to Ryther.

They also found four computers during the search and then amended the warrant to seize the marijuana.

Take a healthy walk into autumn with Harvest Fest