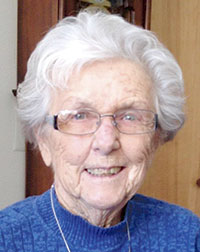 On May 29, 1941, she married the love of her life, Gene Blaser, at Visitation Church in Stacyville.

They began their life together in Austin but it was quickly interrupted due to Gene’s military service in World War II. After four years of many separations due to her husband’s war injury, they were finally fully reunited in 1948.

Marge was a member of St. Augustine Catholic Church. She created a beautiful, loving home for her family and as they grew older, she was employed by Austin public schools. She was an active volunteer and had many interests including golf, Bridge, quilting, fishing, camping, reading and spending time with her children, grandchildren and great grandchildren.

In 1978, Marge and her husband both retired and began 15 wonderful years wintering in Mesa, Arizona.

In 2010, Marge suffered a debilitating stroke and spent the following six years under the loving care of the staff at Sacred Heart Care Center.

She is preceded in death by her parents; husband, Gene, and her sister, Nettie.

Mass of remembrance will be held at St. Augustine Catholic Church at 11:30 a.m. on Friday, Sept. 9, 2016, with Father Greg Leif and Father Jim Steffes officiating. Visitation at the church will be held one hour prior the funeral. Interment follows immediately at Calvary Cemetery.

For those of us who love Marge, we will remember her living life to its fullest.