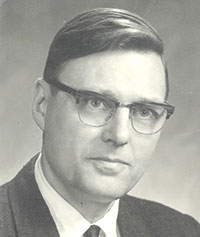 He was born March 7, 1929, in Owatonna, Minnesota, the son of Herman and Kristine (Ramse) Sorenson. Verne grew up on the family farm outside of Blooming Prairie. He left school at age 16 and worked as a hired hand before enlisting in the U.S. Army in December 1946, serving until his discharge in 1948. Verne was a corporal in active duty in Korea. He visited Japan at least once. Upon his return home, he completed his last two years of high school and remained in the Reserves for 6 years. Verne attended the University of Minnesota on the G.I. Bill and took ROTC courses while he studied Agriculture Education. On June 13, 1953 Verne was appointed a Reserve commissioned officer of the Army as 2nd Lieutenant, and was designated a ‘Distinguished Military Graduate’.

Upon receiving his degree in Ag Education, he taught in Pemberton and Lanesboro. It was in Pemberton that Verne met the love of his life, Marion Hanson, at a square dance. They were married on April 3, 1955, at Salem Lutheran Church in Albert Lea, Minnesota. In 1956, the couple moved from Waseca to Lanesboro. After teaching in Lanesboro, Verne earned his M.S. degree in Guidance and Counseling from Winona State University. He then served as a guidance counselor in Preston and Southland.

Verne, Marion and family were members of St. Olaf Lutheran Church since moving to Austin in 1975. The Sorensons remained in their Austin home for 40 years, while they worked, enjoyed their family, and later in retirement years traveled all over the U.S.

Family was of the greatest importance to Verne, and education was a priority — all five Sorenson children attended college. They were also devoted to the in-laws and grandchildren, enjoying the special privilege of helping raise Ashley and Darrin. Verne was especially proud to watch his children or grandchildren playing (or conducting) in the Austin Symphony Orchestra. The Sorenson family outings included picnics, hikes, trips to apple orchards, and rides to Hayward to check on the land. Simple things were a great joy to Verne. It gave him great pleasure to give his grandchildren money for candy at Ankeny’s.

Funeral services will be held at 11 a.m. on Saturday, Sept. 24, 2016, at St. Olaf Lutheran Church in Austin. Friends may call one hour prior to the service at the church. Interment will follow in Oakwood Cemetery. Memorials can be directed to St. Olaf Lutheran Church or recipient of donor’s choice. Worlein Funeral Home of Austin is assisting the family with arrangements. Condolences may be expressed to the family online at www.worlein.com.