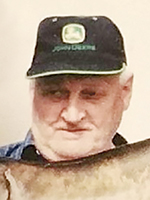 John Dwain Todalen, 92, of Waterloo, Iowa, passed away peacefully, after losing his battle with cancer Thursday, September 8, 2016, at the Western Home Martin Center.

He went to school in Corning and graduated from Blooming Prairie High School. After graduation, he worked on the family farm. John served his country in the U.S. Army and upon honorable discharge, he returned to the family farm and then farmed with others. In 1960 he started work at John Deere in Waterloo. John made many friends working on the assembly line and retired in 1979.

John truly enjoyed the family holidays, vacations, and always having the nieces and nephews to take along with him on his adventure. John’s favorite passion was flying in his earlier years. Most summers were spent with family and friends fishing up on Lake Winnie. The highlight of that was catching ‘Homer’, his prize Muskie. He enjoyed deer hunting trips in northeast Iowa with the Haskin boys and hunting and fishing with friends. He loved scuba diving and shared it with family and friends. Snowmobiling with John was always an adventure. As with all his other hobbies, he loved to share them with family and friends. Being out in his yard and keeping it up was important to him, from his neighbors to his mailman, they watched out for and helped each other. He was always busy doing something and constantly “improving” whatever he bought. John was a selfless man and always put others before himself. He loved his family, his country and Mother Nature.

John was preceded in death by his parents, Halvor and Ruth Todalen, his brother and sister-in-law Harvey and Dorothy Todalen and brother-in-law Bud Varpness.

A funeral service will be held at 11 a.m. on Thursday, Sept. 15, 2016, at Hagarty-Waychoff-Grarup Funeral Service on West Ridgeway. Visitation will be one hour before the service at the funeral home. Burial will be in Garden of Memories Cemetery, where full military rites will be conducted by Evansdale Amvets Post 31, Waterloo Amvets Post 19 and the Iowa Army Honor Guard.

Memorials may be made to the American Cancer Society

Condolences may be left at www.hagartywaychoffgraup.com.