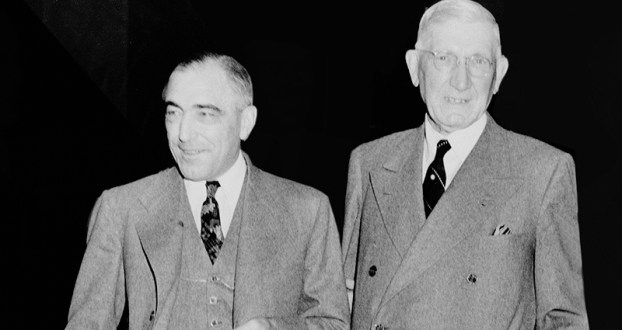 Jay C. Hormel and his father, George A. Hormel, founded The Hormel Foundation in 1941, a move Hormel Foods CEO Jeffrey Ettinger said has been key to the company’s success. Photo provided by Hormel Foods

Editor’s note: This is the first in a two-part series on The Hormel Foundation’s impact in the Austin community.  Read part two here: Creating a positive footprint throughout Austin

A few weeks before Hormel Foods Corp. celebrated its 125th anniversary in July, CEO Jeffrey Ettinger looked back 75 years at a move that he called vital to the company’s longevity.

In 1941, company founder George A. Hormel and his son, Jay C. Hormel, formed The Hormel Foundation. Today, it controls 48 percent of the company’s shares, making it difficult, if not impossible, for anyone to ever take control of Hormel Foods.

“In this day and age of activist investors and hostile takeovers and all those things going on … that was a key move of many years ago to put us in a position where we didn’t have to worry about that kind of noise, and we could instead focus on growing our connection with consumers and having, [and] being a place where someone could make a long-term career, because they knew we’d be around,” Ettinger said this summer.

Foundation Treasurer Jerry Anfinson described The Foundation tracing to the vision of Jay Hormel, who wanted to take care of his community.

When thinking of The Foundation, Austin Area Chamber of Commerce Executive Director Sandy Forstner noted many people first think of funding gifts to the community, such as its annual appropriations budget of more than $7 million to $13 million qualifying organizations and to major projects like The Hormel Institute, Vision 2020, the Oak Park Mall revitalization, the Jay C. Hormel Nature Center’s new interpretive center and many more.

But Forstner The Foundation’s equally as important role is to provide stability for Hormel Foods Corp. and to keep the company headquartered in Austin. 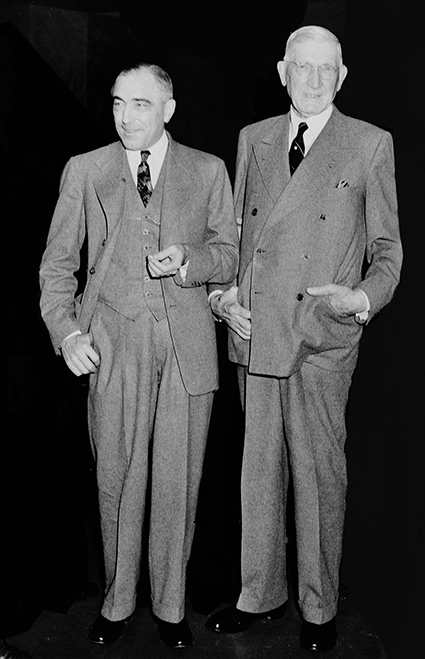 Several major companies have experienced major shifts after sales or have encountered months of uncertainty due to potential sales in recent years.

For several months, a push by Mondelez International Inc. to acquire Hershey Co. put the candy-making company and Hershey, Pennsylvania, in limbo as the state attorney general’s office threatened to take the Hershey Trust Co. to court if it didn’t make governance reforms; however, Mondelez dropped its pursuit in late August.

Though the Hershey sale is off, at least for now, Hormel Foundation leaders have referenced it to show the importance and stability The Foundation helps provide to both Hormel Foods and the community.

In fact, Ettinger, called The Foundation “the glue that ties Austin and Hormel together” in describing its significance and its importance in the Hormel family’s legacy.

The Foundation holds a controlling interest in the company, and Ettinger said that allows the company to move ahead with a long-term perspective.

The relationship of The Foundation and company provides stability for Austin and the corporation.

Foundation Chairman Gary Ray noted it’d be difficult for Hormel Foods to make sound, long-term financial decisions if the company had to worry heavily on quarter-to-quarter numbers as much.

The Foundation’s stake in the company allows Hormel Foods to look to the future.

“They can think more long term in their strategy,” said Ray, the former president of Refrigerated Foods for Hormel Foods.

That’s been key as Hormel Foods has expanded in recent years through major acquisitions, such as Skippy, Muscle Milk, Applegate Farms, Justin’s and more. The Foundation helps position Hormel Foods as a buyer when an opportunity arrises to acquire a company when it meets the long-term vision because it doesn’t have to worry about the effect the sale would have on quarterly earnings.

“There’s a lot of these small companies, they want to be able to try to take it to the next level,” Ray said. “Because they’ve got a great success story but they’re limited in a capital and some of the things that go along with getting bigger.”

Anfinson said The Foundation is very happy when they buy companies like Skippy, since it’s an iconic brand, as was the case with Wholly Guacamole.

Today, it’s a just the nature of business for companies to acquire other companies as part of their growth.

Ray recalls there being far more food companies when he worked for Hormel Foods, but the businesses are in fewer hands today.

“That’s just the trends that are going on in the U.S.,” Ray said.

According to Ray, Hormel Foods often keeps key leadership teams in place and gives them control and tools to keep growing after an acquisition.

But Ray noted the acquisitions bring in additional talent to Austin to the corporate offices.

“There’s synergies in all these acquisitions and as a result of those synergies, many times there’s jobs that flow into Austin, Minnesota, that help the community grow,” Ray said.

As Hormel continues to grow under President Jim Snee — who will take over as CEO when Ettinger retires in October — and Ettinger’s leadership, Rays said the company requires more talent across various sectors of the company.

The Foundation also helps provide stability across the company. Anfinson asked someone recently how many people he graduated from college with are working with the same company they started with, and the man told him virtually none of them. However, Anfinson noted Hormel has many workers who start with the company and work their way up over several decades.

“The company then has the ability to build a team, a team that’s been with them, that performs, and that’s what basically makes it successful,” Anfinson said.

Anfinson noted The Foundation takes a hands off approach to the management of the company.

“If you take a look at companies that are poorly managed or you have activists involved with them, they usually don’t operate as effectively, so we’ve been able to basically let the company form their own management team,” he said. “They can provide their employees with long-term positions. They don’t have to worry about quarterly earnings. We understand what they’re doing.”

The company keeps the Foundation informed on its vision and goals and the two have a strong working relationship.

According to Foundation leaders, a successful Hormel Foods Corp. benefits The Hormel Foundation and to the community, because the more the company makes, the more The Foundation is able to give.

Hormel Food’s dividend increases have boosted the Foundation’s assets — which now total more than $8 billion — and its annual giving.

“It’s a win-win situation for the community when the Hormel company is successful, and the foundation,” Ray said.

In 2015, it donated $7.1 million in annual appropriations along with another $15 million in major projects for a total of $22.1 million.

As Hormel stock improves, it benefits the amount of what the Foundation can do for the community.

“I think we’re quite generous with the community,” Anfinson said.

Over the last four or five years, Hormel Foods has posted double-digit increases in its dividends, which means more funneling back into Austin.

“It’s helped us to be able to step up on some of these projects,” Ray said.

Especially as Hormel Foods’ dividend increases have helped The Foundation’ boost its role in the community.

“It’s been a key component of the community for many years, but it’s really stepped up its visionary work in assisting projects that otherwise might not get done,” Ettinger said. “They’ve had, I think, excellent leadership in that regard.”

ALBERT LEA — The mother of the Alden man who was killed at Myre-Big Island State Park last month is... read more