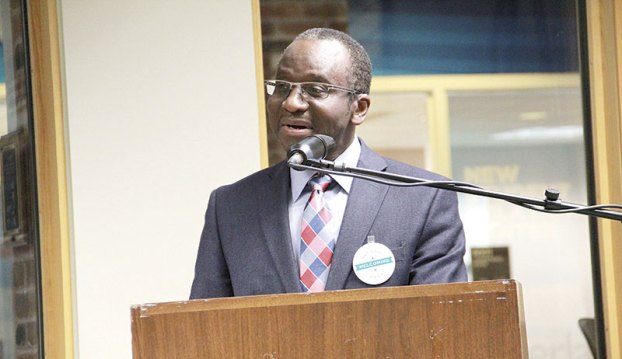 Adama Youhn wore a T-shirt Wednesday with an American flag and checkmark design to encourage people to vote in the Nov. 8 elections.

Though he’s only lived in the United States a little more than three years, he’s not only looking to this country’s future, he’s helping lead a push as Riverland Community College Student Senate president to get students to vote after studies showing college students often don’t vote.

“Vote for anyone of your choice,” he said.

He wants students to vote so they can promote educational issues, like publicly funded community college educations.

“That way we can have a really powerful voice to make things happen,” he said.

Youhn was one of several students who spoke in Riverland’s library during a Wednesday program called “Immigrant Stories,” where several people shared about the challenges and successes of moving to the U.S. from another country.

The program was part of Austin’s first Welcoming Week, which came after the Austin City Council voted in July to join Welcome America, an Atlanta, Georgia-based membership program of about 75 to 100 members offering tools, resources, webinars and toolkits from other communities who have tried and had success with becoming a more welcoming community.

The Welcoming Week celebration includes several community events aimed to bring together new and long-time residents in a spirit of unity to promote inclusion and understanding in the community, according to Austin City Administrator Craig Clark.

“It’s just fantastic to see you all here and participating in it,” Clark said.

And leaders hope Austin’s first Welcoming Week is likely just be the beginning.

Riverland President Dr. Adenuga Atewologun spoke of coming to the United States from Nigeria in Jan. 1, 1983.

“I found a land that really welcomes immigrants and appreciates the importance of diversity,” he said.

After never being out of the tropics, Atewologun moved to Illinois in mid-winter to seek his master’s and doctorate degrees.

Though he faced some issues when he moved like the challenges of learning the intricacies of American English, he said the United States is welcoming to individuals of diverse backgrounds.

“I found a land that really welcomes immigrants and that appreciates the importance of diversity,” he said.

Looking around the library Wednesday, Atewologun called it beautiful to see many nationalities represented. 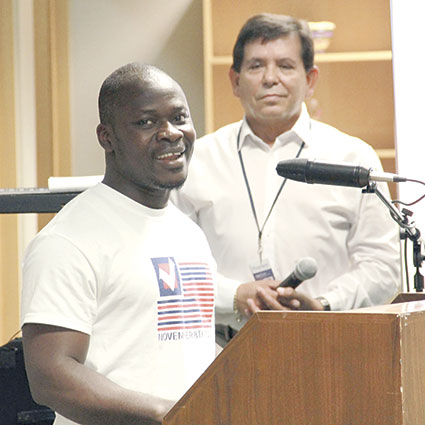 “There is no other place in my mind where you get this kind of unity,” he said.

Mexican Consul Gerardo Guerrero came to Austin from St. Paul for the event and spoke about how his office will provide support to the thousands of Austin residents of Mexican and Latin American descents.

“We are willing to do anything we have to do to work in favor of our community,” Guerrero said.

Youhn and several other students spoke about some of the challenges they faced when moving to a new country, along with the importance of becoming involved and feeling welcomed.

“It’s not easy coming into another country, I can tell you that,” Youhn said.

But Youhn said he felt at home in Austin

“Austin is the first place that I came, and as soon as I came here, I was welcome,” he said.

He also credited Riverland multicultural advisor Miguel Garate with making him feel welcomed when he started at the school.

He said his professors at Riverland gave him the confidence he needs to do better and complete his education, and several other students credited Riverland teachers with helping them as they adjusted to the culture and language.

One student even credited his teacher with encouraging him to write out answers and comments when he struggled to speak his thoughts in class in English.

Gema Alvarado is second generation immigrant, and she praised her parents for their hard work after they came to the U.S. through an amnesty program in the late 1980s.

“Thanks to my parents’ hard work, they’ve been able to equip me with what I need to succeed,” she said. “And I know they sacrificed a lot for me to be where I am today.”

She graduated from Riverland’s human services program, and she described the college as a great way for her to get involved in the community. At Banfield Elementary School, she works as a success coach helping third and fourth graders English as a Second Language students, and she teared up when talking about she too came as an ESL student and knows the challenges they face.

She’s now transitioning into the role of the director of the Parenting Resource Center.