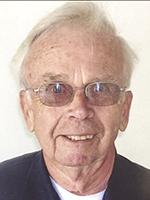 Daryl Howard Madson, 86, of Kasson, Minnesota, formerly of Austin, died Thursday, Sept. 8, 2016, at Golden Living West in Rochester. He was born Aug. 14, 1930, in Canton Township, Fillmore County, Minnesota, to Howard A. and Anna B. (Morem) Madson. After moving to Austin in 1942, Daryl graduated from Austin High School in 1948.  He then went to work for Hormel Foods Corporation as a Stock and Sales Coordinator, retiring in 1975 due to complications of MS. Daryl served his country in the U.S. Air Force in communications from 1950 to 1954. He was stationed in Germany for two years. On June 17, 1956, Daryl and Luanne Swancutt were united in marriage in Austin. The couple raised three children. An active member of St. Olaf Lutheran Church in Austin and then St. John’s Lutheran Church in Kasson, Daryl also belonged to several service clubs including the Disabled American Veterans, the Elks Club, and the American Legion. An avid reader, Daryl also enjoyed traveling, lawn and yard work, and running his mini-business making peanut brittle for the holidays. His most precious time was that spent with his family. Daryl and Luanne moved to Kasson in 2011 to be nearer to their children.

A memorial service will be held at 3 p.m. on Sunday, Sept. 11, 2016, at St. John’s Lutheran Church in Kasson, Minnesota, with Rev. Randy Fett officiating. Friends may call one hour prior to the service at the church. There will be a private family interment at Grandview Cemetery at a later date. Memorials can be directed to St. Olaf Lutheran Church, Austin or St. John’s Lutheran Church, Kasson. Services prearranged and performed by Worlein Funeral Home of Austin. Condolences may be expressed to the family online at www.worlein.com.