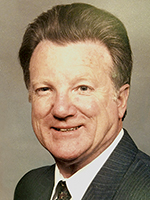 Cecil Byron Mulholland, 79, passed away with his family by his side on Sept. 19, 2016, at his home in Albert Lea, Minnesota, after a long battle with dementia. His wife and children were dedicated to taking care of him.

Cecil Byron Mulholland was born in Utica Township, Winona County, Minnesota, on June 13, 1937, to Donald and Grace (neé Baker) Mulholland. He was raised near Lewiston, Minnesota, and was a member of the local Boy Scout troop as a kid. He graduated from Lewiston High School and went on to receive a Bachelor’s Degree in Social Studies and Physical Education from Winona State.

On June 6, 1959, Cecil married the love of his life, Geraldine “Gerry” Sackreiter at St. John’s Lutheran Church near Lewiston. Cecil became a teacher and coach of football and basketball at Middle River Community High School for three years until 1961. He served in the Army Reserve until June 30, 1962. They moved to Elkton, Minnesota, where Cecil taught and coached from 1962 to 1974. They moved to Albert Lea in 1975, where they made their home for the last 40 years. Cecil went on to attain his Master’s Degree in Guidance Counseling from Mankato State and became a guidance counselor at the Albert Lea Vocational Technical School until 1989. He briefly worked at North Hennepin Community College and was a substitute teacher for area schools before fully retiring.

Cecil enjoyed being active and coaching sports in his younger years. Cecil was very involved in the Sertoma club and was a past governor of the Southwest Minnesota Chapter. He appreciated time spent hunting, fishing, and going to their cabin. Most of all, Cecil loved the time he spent with his children, grandchildren, and beloved wife Gerry.

Cecil was preceded in death by his parents, Donald and Grace; parents-in-law, Marvin and Irene Sackreiter; brother, Dale Mulholland; and sister-in-law, Lorraine Matcke.

A celebration of life service for Cecil Mulholland will be held at 2 p.m. on Friday, Sept. 23, 2016, at Bonnerup Funeral Service, 2210 E. Main St. in Albert Lea. Pastor Sean Forde will officiate. Visitation will be held from 5 to 8 p.m. on Thursday, Sept. 22 at Bonnerup as well as one hour prior to the service. Interment will be in Graceland Cemetery. Military honors will be accorded by the Albert Lea Area Veterans Organizations.