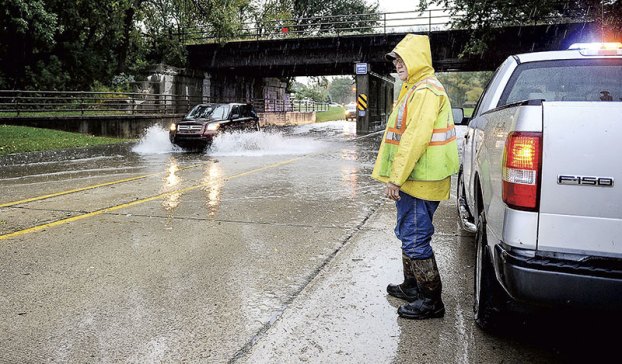 Flooding on Turtle Creek is expected to set a high water mark sometime today and some area roads are under water after 3 to 4 inches of rain fell overnight.

The Austin Police Department and The National Weather Service are tracking the rising waters on Turtle Creek, and Police Chief Brian Krueger said they expect it to surpass the record of 14.8 feet just north of Austin and reach 15 to 15.2 feet. 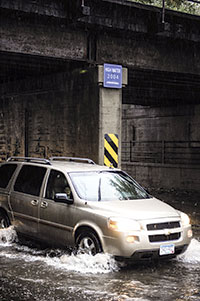 An SUV drives through high water underneath the 2004 High Water mark sign on Oakland Place Southeast.

The weather service expects the creek to crest sometime around 8 to 10 p.m., and the police department has notified homeowners of the rising waters.

The weather service issued flood warnings in Mower for its major waterways, including the Turtle, which rose from 4.35 feet on Wednesday to 12.95 feet by 7:30 a.m. Thursday. The flood warning will last until Sunday night or until waters recede.

Krueger reported several roads were flooded around town, including the railroad bridge on East Oakland Avenue, an area near Sixth Avenue and 21st Street Southwest, and spots by Fifth Place Southeast.

Mower County Sheriff Terese Amazi reported sandbagging being done in Adams, and she said part of County Road 19, which runs north to south in the center of the county, was barricaded.

Amazi and Krueger warned motorists not to drive through flood waters.

As of around 5 a.m., reports around Austin showed 3.18 to 4.03 inches of rain, and Grand Meadow reported 3.7 inches, according to Peter Rogers, a meteorologist with The National Weather Service in La Crosse.

Along with the Turtle, Dobbins Creek and the Cedar River were also under flood warnings, but the flooding was expected to be more minor, according to the weather service.

In Austin, the Cedar was expected to rise above the 15-foot flood stage to near 18 feet by Friday morning for moderate flooding that could affect homes and businesses, according to the weather service.

In Lansing, the Cedar surpassed the 18-foot flood stage and reached 18.5 feet at 7:30 a.m. Thursday. The weather service projected it to rise to 19.9 feet by Thursday night for moderate flooding. 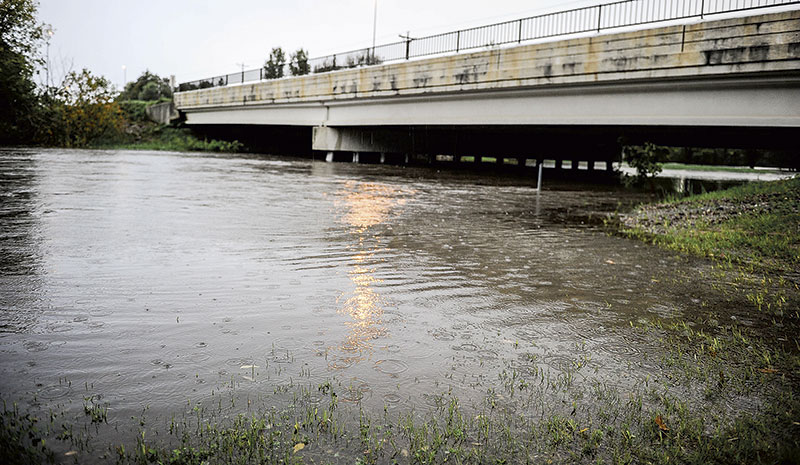 Dobbins Creek was expected to rise above the 11.5-foot flood stage and crest around 13 feet.

Though saturated soils from recent rains made for quick flooding, Austin and Mower missed the worst of the storms.

Parts of the Twin Cities received more than 6 inches, and Waseca saw more than 14 inches of rain in two days. Floyd County in Iowa was also hit hard and may have gotten near a foot of rain in spots, according to Rogers.

“The heaviest rain, as for now, has passed,” Rogers said this morning.