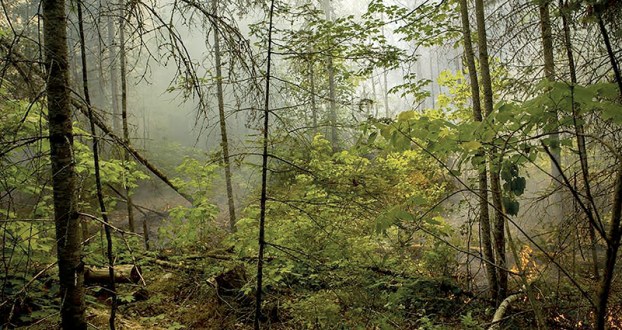 Smoke from a prescribed fire lingers in the forest along Burntside Lake near Ely, Minnesota, last summer. Derek Montgomery for MPR News

DULUTH — The U.S. Forest Service plans to conduct up to four prescribed fires in the Boundary Waters Canoe Area Wilderness this fall.

Intentionally set burns are intended to reduce the risk of large wildfires that could threaten people and property outside the wilderness.

The four burns total more than 10,000 acres in areas affected by a massive windstorm in 1999 that knocked over trees on nearly a half million acres of the Superior National Forest.

Additionally, it allowed young balsam fir trees to flourish over other species, he said. Those trees are especially susceptible to a bug called spruce budworm that eventually kills the balsam, creating yet more fuel for wildfires.

The Forest Service has already conducted several prescribed burns in the Boundary Waters since the blowdown. The goal is to decrease the rate of spread if a fire ignites, giving firefighters a chance to corral it, and people a chance to evacuate if needed.

But Rova said huge fires in the western U.S. over the past four years have diverted firefighting resources and haven’t allowed the Superior National Forest to finish additional burns that are planned for still untreated areas of the blowdown.

In a statement, the Forest Service said a recent analysis has shown that even 17 years after the storm, a major threat of wildfire still remains in blowdown areas.

During the Pagami Creek Fire in 2011 and a 2013 wildfire that burned near Knife Lake inside the BWCAW, officials say fire intensity increased significantly when it hit areas of dead trees left behind by the blowdown.

Still, prescribed fires can be controversial, primarily because of the risk that a change in predicted weather can cause them to burn out of control.

That happened earlier this year, when the Foss Lake Fire escaped containment west of Ely and burned about 1,000 acres.

Two of the prescribed fires this fall are planned in the Gunflint Trail area. A third is located north of Ely near Prairie Portage, and a fourth west of Ely near Crab Lake.

MANKATO — Surveillance camera footage shows a man damaging a sign outside of a Mankato mosque in broad daylight on... read more