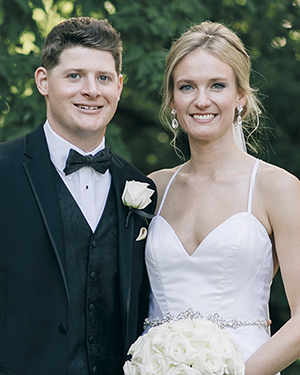 Natalie Miller and Josh Berhow, both of Austin, Minnesota, were married at 4:30 p.m. on July 1, 2016, in the Lumber Exchange building in downtown Minneapolis. Pastor Glenn Monson was the officiant.

Natalie is the daughter of Dan and Dianne Miller of Austin. Her grandparents are Don and Donna Miller of Eau Claire, Wisconsin, Jane Pesch of Austin, Minnesota, and the late Don Pesch. Natalie is a 2005 graduate of Austin High School. She graduated from St. Cloud State University in 2009 with a degree in finance and earned a Masters degree in higher education from Capella University in 2015. She is employed by the Columbia University Medical Center as a manager of faculty appointments.

Josh is the son of David and Louise Berhow of Austin. His grandparents are Rosalie Seltz and Darlene Berhow, both of Austin, and the late Dick Seltz and Mitchel Berhow. Josh is a 2005 graduate of Austin High School and graduated from Minnesota State University, Mankato, in 2009 with a degree in journalism. He is employed by the Sports Illustrated Golf Group as a producer for GOLF.com.