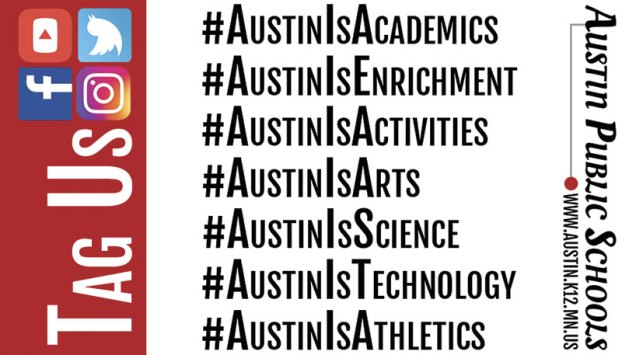 Spreading the word about #Austin schools

When families, students and district leaders attend their first concert of the 2016-17 school year, Austin Public Schools leaders hope they’ll post on social media about it and tag it using one of the recently unveiled hashtags like #AustinIsArts.

“If we can get everybody to tag that, then we’d have this string of pictures and stories about how great that music concert was, so we’re really hoping to get people to participate in helping share the news that way,” Director of Educational Services John Alberts said.

The #AustinIs hashtag initiative is just one way Austin Public Schools is getting ready to share the word about its successes and promote its reputation as a world class school system.

Alberts updated the school board Monday on the districtwide communication plan to promote positive messages surrounding the school.

Since, the committee has discussed key themes, formed a communication plan, launched a new and universally accessible website, and updated its communications plan.

“It’s been really a rather quick timeline up to this point,” Alberts said.

The committee started meeting with some basic goals. The first was to build the district’s reputation as a world class school system and to create a space to share good news stories and students, staff and alumni.

Alberts used Hope Jahren as an example. The Austin High School graduate published the renowned book “Lab Girl” earlier this year and was named one of Time’s 100 Most Influential People. 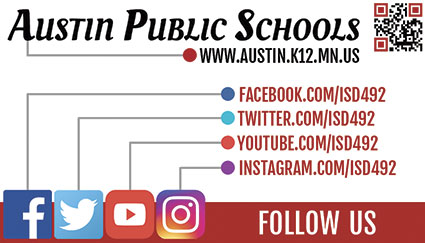 “We’re really hoping to highlight that and say here are some proud stories we have of Austin High graduates being successful in the world,” Alberts said.

The district also aims to build its reputation through the #AustinIs hashtag initiative on social media.

A big part of the push is to capitalize on the stories, content and social media posts that are already generated by students and families.

“We’re engaging the people that are already there,” Alberts said.

Another goal was to create an overarching brand and message, which is where the #AustinIs campaign came in.

If people tag their posts with one of seven #AustinIs tags, people will be able to search the themes and hashtags and find stories under each.

Alberts noted the district will still be submitting columns and working to promote their message through ties to traditional media like newspapers, radio and television, but it’s looking to engage the public too.

Another goal was to create a shared space for sharing those good stories. A big part of that was accomplished when the district launched an updated website in March, which boasts a fresh look and is accessible on all devices.

The site will also feature a space to share success stories from the district.

“To have accomplished all that’s been accomplished technology wise in the last year is pretty astounding,” Goetz said. “So that whole crew deserves a pat on the back.”

Recycling changes ready to roll out

In about a week, Mower County is primed to boost recycling by accepting plastics Nos. 1-7 and by increasing curbside... read more