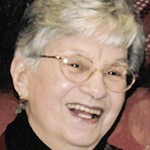 Margaret was born in Adams, Minnesota, on May 5, 1918, to Alma Hanson and Stanley Dale Smith. She moved to LeRoy, Minnesota, at 3 months of age. In 1929, when she was 11, her family moved to Austin. She graduated from Austin High School in 1936 and went to work for Hormel Foods. Her “claim to fame” was she witnessed the first Spam can come off the line. On Oct. 25, 1937, she married the love of her life, Theodore R. Hall. They were married for 58 years until Theodore passed away in 1995 at the age of 80. Margaret enjoyed being a homemaker and worked at several retail businesses during the holiday season. She also worked as a teachers aid for the Austin Public Schools.

While a member of St. Olaf Lutheran Church, she taught Sunday School and was a devoted member of WELCA and Ladies Aid Circles. She took part in Symphony Study Group, was active in the PTA, and held every local office, except treasurer, for the DOES. Including State President, where charity, patriotism, loyalty and love were the motto. Margaret volunteered at the American Red Cross for 20 years and was a member of DAR (Daughters of the American Revolution).

In her pastime she enjoyed Baking, Reading, Jig Saw Puzzles, Word Finds, Knitting and Crocheting. She made 520 baby caps that were sent to Tanzania and the Marie Sanvick Shelter in St. Paul. Her family received homemade afghans, and various handmade items throughout the years. Every family member received a handmade Christmas ornament every year!

Funeral services will be held at 11 a.m. on Tuesday, Aug. 9, 2016, at St. Olaf Lutheran Church in Austin with Todd Portinga, associate in ministry, officiating. Visitation will be held from 4 to 7 p.m. on Monday, Aug. 8, 2016, at Worlein Funeral Home and one hour prior to the service at the church.

Interment will be in Grandview Cemetery, Austin. Services prearranged and performed by Worlein Funeral Home of Austin. Condolences may be expressed to the family online at www.worlein.com

A New York Time best-selling author named one of Times Magazine’s 100 Most Influential People will be at Austin Public... read more