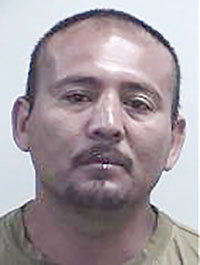 A man who cut his niece took a plea agreement Monday in Mower County court.

At about 10:35 p.m. on June 29, Austin police responded to the 1900 block of Fifth Avenue Northwest regarding a domestic assault in progress. While en route, they were informed a 21-year-old woman was stabbed.

The victim’s mother was driving her to the hospital when police stopped them. The mother told police that Estrada cut the victim, then left the home and still had the knife.

Officers gave the victim first aid and Gold Cross Ambulance arrived to treat a two-inch laceration near her thumb. She told police Estrada was fighting with her mother and placed a knife against his own throat.

The mother said Estrada was intoxicated and told him to leave her house. He wanted to stay because he didn’t have a place to live. He then became upset after she threatened to call police, which she did after he pushed her, slapped the phone out of her hand and grabbed the knife. The daughter tried to get the knife away from him and that’s when her hand was cut.

She told police she wasn’t sure if the cut was intentional, but the mother feared he would hurt her or someone else.

Police found Estrada and took him into custody. They found a glass methamphetamine pipe in his right front pants pocket and smelled alcohol on him.

As they transported him to jail, he became hostile and threatened an officer. He was noncompliant with jail staff.

On June 30, he told police he never intentionally slashed anyone with the knife and denied knocking the phone out of the woman’s hand. He added that he only “found” the meth pipe, only smokes marijuana and did not use other drugs.