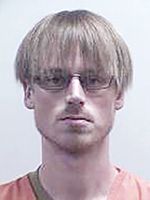 Michael Beauseigneur pleaded not guilty Thursday in Mower County court to third-degree burglary and theft, both felonies, for accusations that he took his girlfriend’s key to The Style Lounge and took more than a thousand dollars.

On July 21, The Style Lounge reported to police that $2,653.70 had been taken since a computer system tied to the cash drawer had crashed, while $75 from a tip jar and $300 from an office party fund had also been taken.

The owner, employees, landlord and a cleaning service had access to the building, but the owner told police she didn’t suspect any of the nine employees of the theft.

Then on July 24, Beauseigneur surrendered himself to police and told officers he took more than $1,300, which included $128 from the tip jar, to buy heroin over four to five times over two weeks, according to a court. He gained access after taking his girlfriend’s key, which he said he did without her knowledge.

He was arrested and taken to jail.