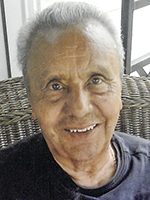 He was born on Oct. 31, 1936, in Crystal City, Texas, the son of Jose and Juana Meza Hernandez. Jesse grew up in Texas and was raised by his aunt. He came to Minnesota as a migrant worker, employed by Hollandale Association. Jesse also worked at The Bootery, owned by Don Holtorf, where he learned the shoe repair business.

He married Marlene Boverhuis in 1959. The couple divorced in 1976. After moving to Blooming Prairie, he worked as a custodian for more than 20 years for Blooming Prairie Schools, owned and operated Jesse’s Shoe Repair, and started Jesse’s Cleaning Service, which he operated for 20 years. In June 1985, Jesse married LaVon (Filley) Madsen at First Lutheran church, where he was a longtime member. He also belonged to the Blooming Prairie Lions Club. Jesse and LaVon operated three motorcoaches as part of their Prairie Blossom Tours. Jesse enjoyed his role assisting LaVon and entertaining their passengers. His favorite pastimes included boating, having coffee with the guys, and Friday and Saturday night at the races where he followed his son and grandson. He will be dearly missed by his family and friends.