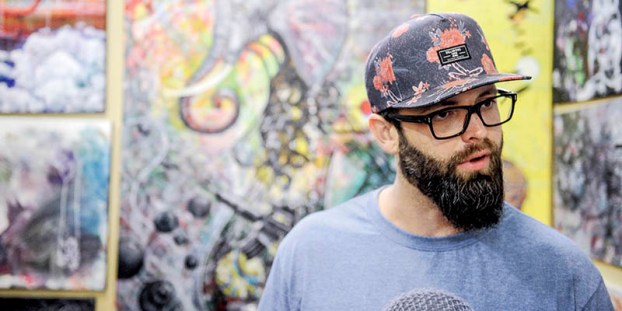 From Austin High School to ArtWorks

Keenan Schultz may have been one of the youngest artists featured in the Turbine Gallery of the fifth annual Austin ArtWorks Festival Saturday, and he was sure to chat up some fellow artists for inspiration in his early art career.

Schultz won the 2016 Austin High School Artist of the Year Award, which has sparked several other artists into careers in the arts.

“I think it’s so cool,” Rietz said. “The three were all artists of the year.”

Standing outside the Turbine Gallery, that revelation drew a laugh Saturday from Austin Area Commission for the Arts Executive Director Jennie Knoebel, who admitted she didn’t realize they had the three for AHS winners at this year’s festival.

“They all won Artist of the Year and they’re in our festival,” Rietz said. “Isn’t that cool?” 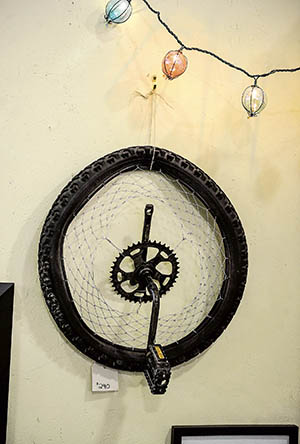 Schultz has had a busy 2016. First, he won 2016 AHS Artist of the Year and then he participated in his first festival over the weekend.

After volunteering at the festival last year, Schultz was excited to be a featured visual artist in the Turbine Gallery.

“This festival’s always awesome,” he said.

“It’s really, really awesome to be able to meet all of these artists and talk and learn about what I can do in the future,” he said.

Right now, Schultz says his strength is in the visual arts, and he displayed paintings, charcoal pieces, water colors and a few sculptures.

His favorite medium is currently graphite — or pencil — which he thinks he’s best at now. One of his pencil drawings took Best In Show in the 2016 Minnesota Junior Duck Stamp Program.

Schultz started taking art classes as soon as he could in school and hasn’t stopped as he’s working toward an Associate of Arts at Riverland Community College. He plans to transfer to the University of Wisconsin-Stout to pursue his Bachelor of Fine Arts.

Schultz is looking forward to honing his artist skills as he works to gain more experience as an artists. He hopes to work more on sculpting various mediums as he tried to hone in on his artistic focus.

But for now, he’s just happy to participate in his first festival.

“I’m just really happy that I was invited here,” he said. 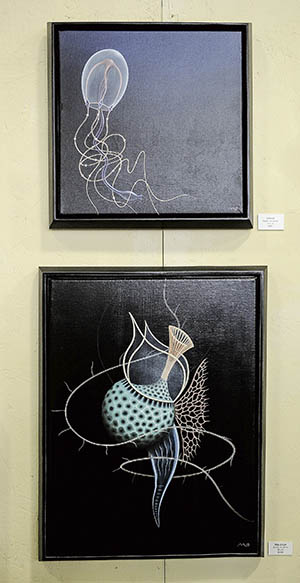 As he stood beside his many acrylic paintings, Ofstedahl looked back at his 2000 selection as AHS Artist of the Year as a great boost,

“I think that award … did encourage me to keep going with it,” he said of his art.

Ofstedahl, who now lives in Ashland, Orgegon, works largely with acrylic paint and describes his work as a blend of science and surrealism inspired by biological forms and microbiology.

He took inspiration from a single-celled microorganism from the sea for one piece, while a microscopic view of a bee’s eye inspired another.

He’s also gravitated toward branching patterns, which can be found in human veins, trees, rivers and all over nature.

For young artists, Ofstedahl says it’s unlikely they’d have a defined path at a young age, but he encouraged them to experiment with different styles, noting each artist has a different path.

“Do what feels natural to you,” he said.

After graduating from AHS, Ofstedahl attended what’s now Minnesota State University, Mankato and graduated with a Bachelor of Fine Arts with a focus on sculpture and ceramics. He played in Byron Space Circus with Chris Lynch, who performed with Marty O’Reilly & the Old Soul Orchestra at last year’s festival, and with Felten, a fellow 2016 ArtWorks artist and 2001 AHS Artist of the year winner.

Ofstedahl experimented with various mediums in high school and college, especially with sculptures, but didn’t find his current source of inspiration until he got back into painting around 2009 and found an anatomy book.

Then he delved deeper into his painting, using the human body and biological forms for inspiration.

Ofstedahl encouraged young artists to learn the basics, like being able to draw what they see.

“Learn the foundations and then you can open up to finding your own style,” he said.

In his third Austin ArtWorks Festival, Ofstedahl is thrilled to see the festival continuing to flourish and grow.

Ofstedahl won the purchase award in ArtWork’s second year, and two of his paintings are hanging at I.J. Holton Elementary School. 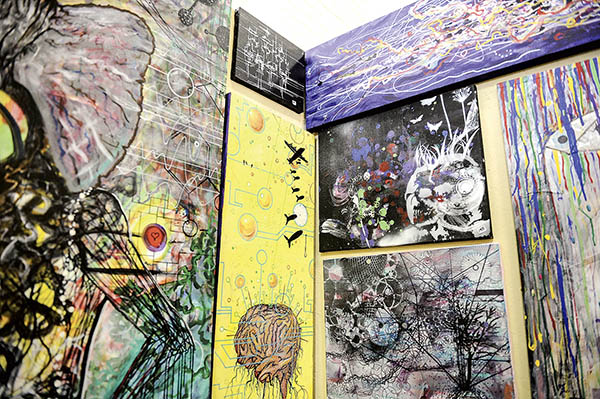 Pointing to one of his acrylic paintings, Felten describes how the piece started with a swatch of colors before he got an idea. He looked at the piece and part of it looked like an elephant head, so he let his ideas develop from there.

The finished piece features an outlined pregnant elephant holding a machine gun over the collage of colors.

“None of that was planned, like, ‘I’m going to paint a pregnant elephant with a machine gun,’” he said. “It was just colors.”

Felten, the 2001 AHS Artist of the Year, participated in his first ArtWorks Festival over the weekend and was excited to return home to display several of his acrylic paintings, a few sculptures and skateboards he’s painted.

After experimenting with various mediums at AHS and in college, Felten now paints largely with acrylics, describing his style as playful as he’ll let his 4-year-old son paint on his canvasses before he’ll take them and add to them and give them a focal point.

Felten doesn’t set out to paint landscapes or portraits, he rather focuses on colors.

“I’m just going to get some colors and see what I see,” he said.

Along with canvasses, he enjoys painting on recycled materials like wood and, as a skateboarder, recently started painting skateboards. Along with acrylics, he also uses markers, ink and paint pens.

He recently started welding and doing some metalwork pieces.

After growing up in Austin, Felten lived in Santa Cruz, California, for about 12 years before moving to Mankato recently.

After participating in festivals in California, Felten said his first experience at ArtWorks definitely stood out.

“This here is the coolest art festival I have seen — in any major city or anywhere I feel in the county,” he said. “This is really cool for Austin.”

Like Ofstedahl, Felten described winning Artist of the Year was a confidence boost as he continued to hone his artistic style.

Now, Felten simply enjoys painting, saying he paints for the sake of painting without aiming to create pieces that will sell.

“I just do it to do it,” he said. “If people like it, great; if they don’t, great, as long as they see something maybe they’ve never seen before.”

Though art can be discouraging at times, he encouraged young artists to continue growing and developing their own styles.

“When it’s your passion, just keeping doing it whether anyone else likes it or not,” he said.

Wishing a legend well on his retirement

As we approached the Jay C. Hormel Nature Center’s interpretive center, a squirrel darted across the trail in front of... read more