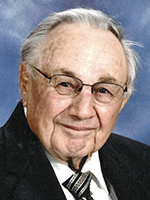 He was born Oct. 16, 1930, in rural Lyle, Minnesota, the son of Otto and Gladys (Hanson) Tischer. Dale received his education in Austin, Minnesota, graduating in 1948. On Nov. 14, 1950, he was united in marriage to Roberta Ann Frettham at First United Methodist Church in Austin. He was employed by Martin Bustad and Son Construction Company, doing welding, operating heavy equipment and plowing snow from 1949 until the business closed in the 1970s. He then joined Wallace Bustad Crane service, retiring in 2005. Over his career Dale was involved in the expansion and new development of road projects in Southern Minnesota and Northern Iowa. He also did excavation work for many Southern Minnesota farmers, and later completed both residential and commercial landscaping projects in and around the Austin area. Dale was a long time member of First United Methodist Church. He enjoyed socializing at auction sales, doing yard work and spending time with his family. Other favorite pastimes included dancing, playing cards with friends and watching his favorite television shows, Judge Judy, RFD-TV, and any western. Dale loved to tinker; he was an inventor/developer and everything in between. If something could be improved, he figured out the best solution. Dale loved old time music, particularly polkas, and he enjoyed playing the accordion. He passed his passion for music on to his sons. His wife Roberta passed away on March 12, 2012.

Survivors include two sons, William (Linda) Tischer of Shoreview and John (Kim) Tischer of Waseca; two grandsons, Paul Tischer of Minneapolis and Carl Tischer of Ames, Iowa; brother, David Tischer of Austin; sisters, Norma Arends of Hayfield and Marilyn (Duane) Halverson of Austin and many other relatives and friends. He was preceded in death by his parents Otto and Gladys Tischer; his wife, Roberta in 2012 and a sister, Lois “Darlene” Paulson.

Funeral services will be held at 11 a.m., Thursday, Aug. 11, 2016, at First United Methodist Church in Austin, Minnesota, with Rev. Dennis Tamke officiating. Interment will follow the service in Oakwood Cemetery, Austin. Visitation will be held from 9:30 to 11 a.m. on Thursday, Aug. 11, at the First United Methodist Church. Condolences may be expressed to the family online at www.worlein.com.

Source: Kansas boy who died at water park was decapitated

KANSAS CITY, Kan. — A 10-year-old boy who was killed at a Kansas water park while riding on a 17-story... read more