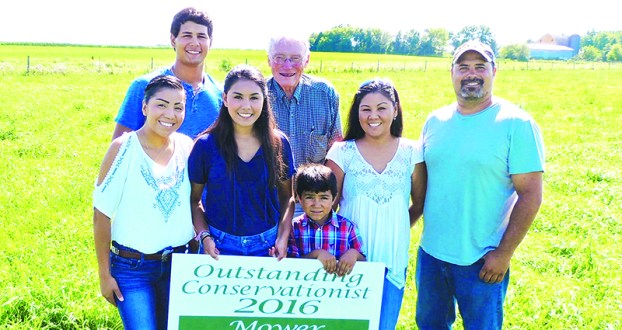 The Cotters has been recognized as Outstanding Conversationalist 2016 by the Mower Soil & Water Conservation District. -- Photo provided

For 140 years, the Cotter family has grown crops on the western edge of Mower County, starting with a 240-acre plot that proved difficult to first plow with oxen.

Today, the Cotter family farms 1,100 acres in Austin Township for corn, soybeans, hay and canning vegetables, typically sweet corn and peas. Tom Cotter leads the family operation — which includes raising cattle for a retail beef business – while working with his semi-retired father, Michael Cotter, who is the longest grower since the 1950s for an area vegetable canning company.

With their farming operation, the Cotters have implemented various conservation-minded practices over the years, including an intense focus on cover crops in recent years. About 15 years ago, they also purchased 55 acres of oak savanna prairie just down the gravel road from their farm.

Tom and Michael Cotter and family are the recipients of the 2016 Outstanding Conservationists Award given by the Mower Soil & Water Conservation District. They were honored Tuesday at the Mower County Fair.

“The Cotters clearly understand soil health’s importance — including for water-quality issues — and its role in enhancing crop productivity,” said Steve Lawler in a press release, the Mower SWCD resource specialist who has worked closely with theCotters, particularly through the Mower-Fillmore Soil Health Team. 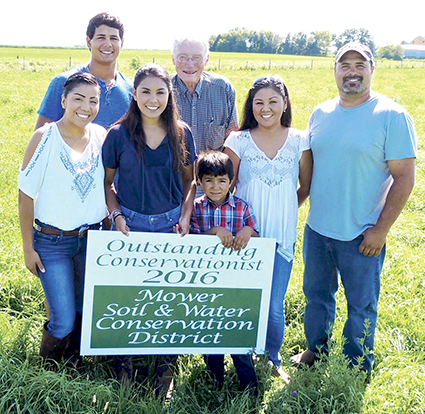 The Cotters has been recognized as Outstanding Conversationalist 2016 by the Mower Soil & Water Conservation District. — Photo provided

In addition, the Cotters will be honored this December at the 80th annual convention of the Minnesota Association of Soil & Water Conservation Districts (MASWCD) in Bloomington. Local SWCDs are encouraged annually to nominate farmers, individuals, conservation organizations and other groups for their accomplishments in implementing conservation practices and improving Minnesota’s natural resources.

Mower SWCD also gave its Outstanding Wildlife Conservationist Award to the Southland Sportsmen’s Club. Started in the 1980s, the club has about 50 members mainly from the Adams and Rose Creek areas and works to acquire land to set aside for wildlife and public hunting, said Gary Noterman, a club leader.

The club, he said, has acquired about eight parcels of land throughout Mower County, with its biggest being 80 acres near Adams – the Tom Mullenbach Wildlife Management Area – deeded to the group from the Tom Mullenbach estate. Club members plan to create a small shooting range at the site, and they planted seed there this spring for about half of the property under the federal Conservation Reserve Program that removes environmentally sensitive land from farm production and plants species to improve its health and quality.

An annual gun raffle along with steak fry dinners in March and October in Adams are the club’s main fundraisers to support its wildlife conservation projects.

As for the Cotters, Michael Cotter — an award-winning, nationally known storyteller for tales of farm life and his passion for the environment – first had the idea about 12 years ago to try cover crops on part of their farmland.

Early on, the Cotters experienced success along with setbacks that left them questioning cover crops.

Cover crops — grasses, legumes or forbs, such as rye and buckwheat – are planted to provide seasonal cover on cropland when the soil otherwise would be bare, such as when the crop emerges in spring or after fall harvest. They promote minimal disturbances to the soil and improve overall soil health by preserving its nutrients.

Using cover crops isn’t a widespread practice in Minnesota, however, as they can be difficult because there is a small window of opportunity for establishing them.

Despite initial setbacks and stress, the Cotters have forged ahead with cover crops, focusing more than ever on the conservation practice in the past three years.

“It felt like the right thing to do,” said Tom Cotter, who also runs a Cotter’s Custom Cover Crops business.

These past two years have shown the true benefits of incorporating cover crops into their farming, Tom Cotter said.

A 2-acre wet spot has disappeared after cover crops were planted in that area during that time, he added, showing the practice has helped improve water infiltration in the soil.

Overall, the Cotters started with 60 acres of cover crops before expanding to 300 acres this year, using an air seeder to plant cover crops into standing corn. They plan next year to farm 500 to 600 acres in soybeans planted into cover crops. Tom Cotter also has been able to use the cover crops as a feed source for his beef cattle.

The practice has allowed the Cotters to avoid plowing the cover crop land and use much less chemicals for controlling weeds. No-till reduces soil erosion and preserves soil nutrients.

Their no-till soybeans are looking just as good this year, if not better, than till soybeans, Tom Cotter said. They are a great example to show other producers when he does outreach on cover crops, including hosting a “Shop Talk” session Tom Cotter is a member of the Freeborn County Soil Health Team as well as the new Mower-Fillmore Soil Health Team that seeks to connect with ag producers who want to learn more about cover crops and reduced tillage systems. He has enjoyed working with soil specialists from all of the agencies involved with the teams.

When starting out with cover crops, Tom Cotter often wondered if he was alone in this area for that practice. He soon made connections with other farmers experimenting with cover crops. They all learn from each other, he said.

“It’s so much easier to do something when you’ve got someone else to talk to,” Tom Cotter said.

As for the Cotter family’s farm operation, Tom Cotter said it will have its ups and downs like everyone else but he believes it’s heading in the right direction with cover crops.

“It just feels really comfortable,” he said. “I feel it is the right way to go.”

Half-cent hike gets the nod; Won’t take affect until 2018

The county board is sending a message to the Minnesota Legislature that it needs to compromise and fund infrastructure projects.... read more