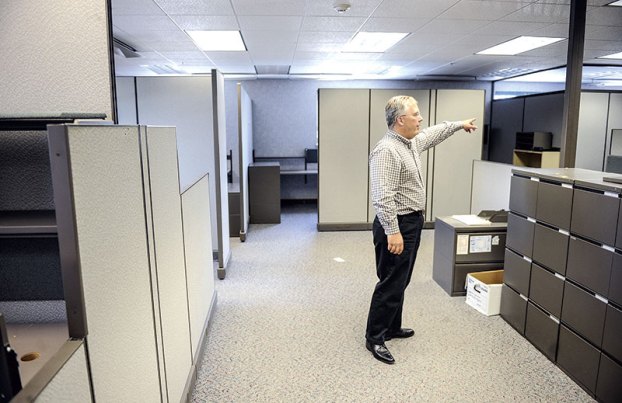 Austin City Administrator Craig Clark points out some of the changes that will be made to the former Austin Utilities space Tuesday afternoon. Photos by Eric Johnson/photodesk@austindailyherald.com

Bringing it all together; Bid approved to remodel City Hall into central facility

The city of Austin is primed to remodel City Hall, 500 Fourth Ave. NE, to bring most of its offices under one roof and help improve accessibility to the public.

“This will be City Hall now, rather than sort of the municipal building,” City Administrator Craig Clark said.

On Monday, the Austin City Council approved a $377,000 bid by Wagner Construction for the remodeling of City Hall now that Austin Utilities has moved to its $18 million Energy Park administrative facility.

The council also approved two alternates, a $6,800 alternate to repaint some of the exterior portions of the building to match the rest of the building, and an additional $11,800 to replace the aluminum entrance doors to the south parking lot. The plan also calls to rekey the doors so there is only one master key for $55. 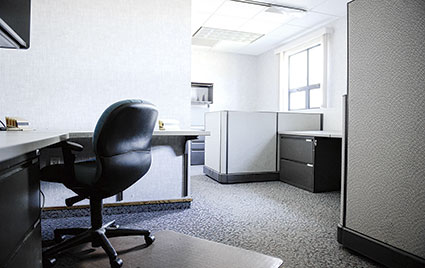 This cubicle space will be converted to a conference room.

Council still needs to approve bids for signage and some furniture for the project.

Clark said the move will accomplish a lot of what Austin Utilities’ move to the Energy Park site did: It brings everyone under one roof and improves efficiencies, only the city is able to do that without building a new building or making major structural changes to the building.

“I think it’s helpful,” Clark said. “Proximity does matter. Being able to work more as a cohesive group, not that we weren’t before.”

The work is supposed to start around September with office staff moving in around March.

After the remodel, the former Austin Utilities space will house most of the city’s administrative and finance offices along with Mayor Tom Stiehm, Administrator Craig Clark and other offices.

Austin Parks and Recreation will move into the current administrative office area on the ground floor.

The city’s engineering departments — like public works, storm water, building inspections and such — will also move to the old Austin Utilities engineering area on the second floor. 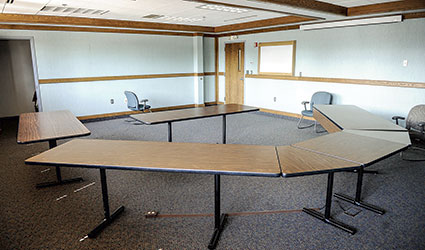 The utilities board room will be converted into cubicle space. Eric Johnson/photodesk@austindailyherald.com

Construction to remodel the current Austin Utilities space in City Hall could include new permanent walls on the main and second floors, new side cube walls, new carpet on the first floor, new paint and a new conference room on the main floor.

In other areas, the city could repaint most areas, create a new break room in the engineering staff work area, repair exterior stucco finish and replacing the current city clerk door with windows for Parks and Rec. The city would also add backlit signage on the north and south sides of the building.

The city is still working on getting bids for new signage and furniture.

The city previously chose Zenk Read Trygstad and Associates (ZRT) from Albert Lea and Director of Administrator Services Tom Dankert said they proposed the cost of the project not to exceed $48,000.

City Hall was built in 1961 and remodeled it in three phases from 1996 to 1998. Austin Utilities moved into the building in 1999, according to Dankert.

Jessy Dominguez A 25-year-old Rochester man is in the Mower County Jail after an eventful night with Austin Police. Just... read more