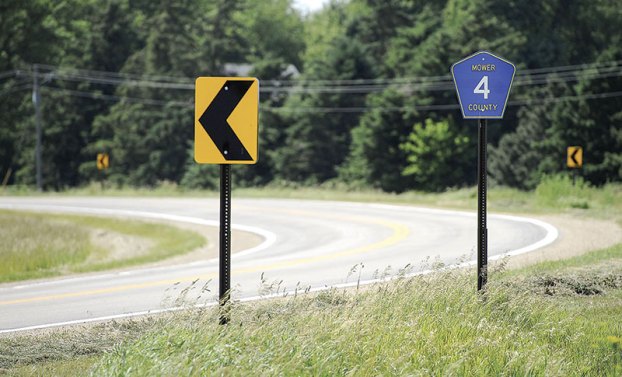 County Road 4 is one of the roads that could possibly see the effects if a half-cent sales tax is enacted by the Mower County Commission. Eric Johnson/photodesk@austindailyherald.com

Board could vote Tuesday on half-cent sales tax

The Mower County board could take action Tuesday on whether to approve or deny a half-cent sales tax to fund road and bridge projects over the next 10 years.

The board is slated to discuss the sales tax, which has drawn mixed reactions from the community, at 10 a.m. during its regularly scheduled board meeting in the basement board room of the Mower County Government Center, 201 First St. NE.

The board could vote or it could just discuss the issue and vote at a later meeting.

The half-cent sales tax proposal would fund more than 40 specific road and bridge improvement project in the county over the next 10 years with the help of sales tax dollars, should the board eventually vote to approve the tax.

But the public and the board have expressed mixed opinions on whether it’s the best option.

Business leaders spoke out against the plan at a public meeting last week, calling it an unfair tax that would increase tax burden on Austin businesses.

However, highway engineers say the county needs additional funding to keep up with infrastructure demands

“We need a transportation system to match [these areas],” he said.

Jon Erichson, the former city of Austin engineer, agreed with Hanson’s opinion. Erichson doesn’t believe the gas tax does enough to fund the county’s transportation needs, along with new additions being made on the roads like pedestrian walkways and street lights, among other things.

“We have to increase funding to provide that,” he said.

Business leaders instead called for a comprehensive statewide plan to come from the Legislature.

“We are seeking comprehensive, state-wide solutions to this issue,” Forstner said.

But that’s a big part of the problem. Despite agreeing on the need, state Democrats and Republicans have been unable to come up with a compromise for increasing dollars for transportation projects.

County commissioners have been outspoken with their displeasure over the inaction at the Capitol.

The board has outlined a roughly $100 million need for road and bridge projects over the next decade and an estimated funding shortfall of $6.5 million per year.

If the board votes to enact the half-cent sales tax, it would slim the county’s projected annual funding shortfall to $5 million a year, but it wouldn’t completely eliminate funding shortfalls.

After holding the public hearing, the board must vote to approve or deny the sales tax by early September for it to be implemented at the start of 2017, should the board approve it.

—Alex Smith contributed to this report.

Summer for Friends: The season of warmth opens up to time with friends

Personally, summer is my favorite time of the year. The grass is greener, days are longer, nights are shorter and... read more