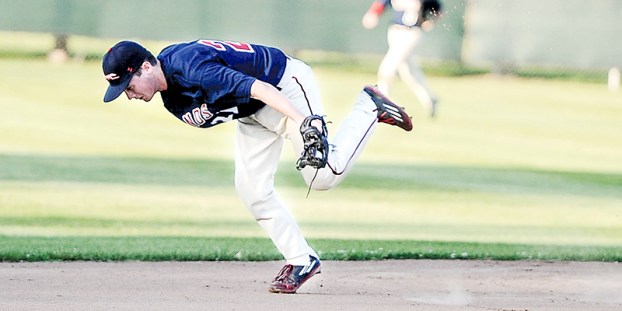 There wasn’t any postseason seeds on the line when the Austin Blue Sox and Austin Greyhounds met in Marcusen Park Friday, but there was plenty of pride at stake.

The Blue Sox were able to come back from an early deficit and beat the Hounds 7-6 and sweep the season series.

“We were playing for pride,” said Blue Sox center fielder Ricky Marinez, who was 4-for-5 with four stolen bases and an RBI. “It’s always nice to win against the other Austin team. When I first started playing I was on the losing Austin team, but look at us now. We just swept them this year.” 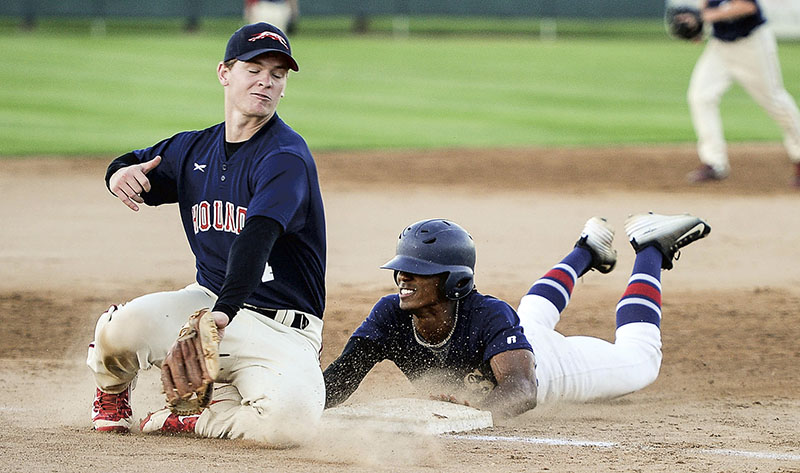 The Hounds (8-11 overall) had jumped out to a 5-1 lead in the top of the fourth when Alex Ciola, Ethan Horstmann and Jordan Hart all had an RBI single, but the Blue Sox (10-10 overall) scored at least one run in the next four innings. The Blue Sox took a 6-5 lead in the bottom of the sixth off a Hounds error and they took a 7-5 lead when Parker Mullenbach singled in a run in the seventh.

The Hounds loaded the bases with no outs in the top of the eighth, but were able to just get one run. Hart grounded out to score a run to make it 7-6 and Blue Sox ace Brady Banse was able to shut down the Hounds the rest of the way to get the save.

Banse will likely be on the mound when the Blue Sox host game two of their three game Section 4 series against Brookings in Marcusen Park 7:30 p.m. Monday. Kyal Williams will pitch game one in Burnsville 7:30 p.m. Sunday.

“We’ve had a couple of games were we’ve had nine or ten guys and kind of scrapped the lineup together,” Rector said. “We’ve got Aussie coming back to pitch Sunday and on Tuesday we’ll have Brady Banse for the home crowd. Hopefully we can sweep those guys.”

Marinez has given the Blue Sox a consistent presence in center field and at the top of the order this summer. He spent one year playing for Riverland Community College, and he will be a junior at Iowa’s Clark University, an NAIA school that went 38-17 in baseball last season, in the fall.

Marinez said he doesn’t mind settling for singles because he knows he can advance once he gets on base.

“I’m not a power hitter. I like to get on base so I can work with my speed,” Marinez said. “I like stealing bases. That’s my thing and I also help my team by doing that. If I get a base hit, that can turn into a double or a triple.”

The Blue Sox announced Kathy Serratore into their Hall of Fame during the game. Serratore runs the concession stand and puts countless hours into maintaining Marcusen Park along with her husband Joe.

“The amount of hours she puts down here is unbelievable,” Rector said of Kathy. “What she does is very big and if we didn’t have her and Joe, who knows what shape this ball park would be in.”

The Hounds will open their Section 4 playoffs in Marcusen Park 7:30 p.m. Thursday.

A great place to play ball: Lyle field brings back tradition of softball on the farm

LYLE — When Gary Meyer built a home on his grandpa’s farm land about a mile from Lyle back in the... read more