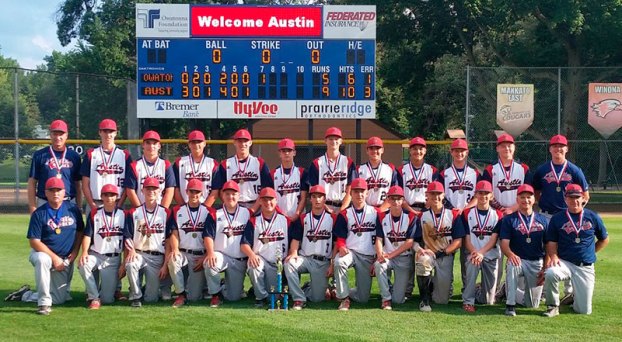 The Austin VFW baseball team recently clinched a trip to state at the District tournament in Owatonna. Photo Proivded

It’s been a long, fun summer for the Austin Post 1216 VFW baseball team and they’re hoping the best is yet to come when Austin plays in the VFW state tournament in Fergus Falls next week.

Austin is riding a six-game winning streak as it prepares to play Luverne in the opening round of the 10-team double elimination tournament in Fergus Falls 1:30 p.m. Aug. 11.

“This summer’s been a blast,” said Austin’s Josi Bothun. 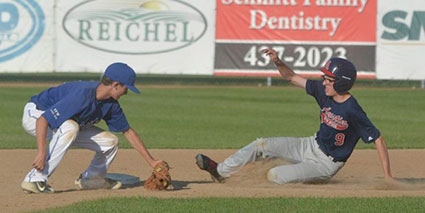 Austin rattled off three straight elimination games in Sub-Districts and it won all three games in the District tournament, but head coach Mark Conner thinks his team really found itself in a late regular season game against Red Wing. That game saw Austin allow seven runs in an inning to blow a lead, but Post 1216 was able to come back and win by 10 runs.

“Never once did they miss a beat and never once did they doubt themselves [against Red Wing],” Conner said. “Then they took the long way through Sub-Districts where they fought through a lot of adversity and showed their true character.”

Conner has coached the Austin VFW team with assistant coach Joe Ciola for the last four years and the team also went to state two years ago. Post 1216 won the state tournament in 2010 and it hosted the state tourney in 2011.

“There’s a lot of similarities between this team and the team from two years ago,” Conner said. “It’s exciting to be able to go back to state. We would’ve liked to have gone last year, but we were a little more inexperienced last year and it goes in cycles.”

Austin’s Phillip Zynda recalled that this same group of players won a Gopher state baseball title as 12 year olds and he’s excited to play in another state tournament.

“It’s kind of a breath of fresh air. We had to fight our way back in Sub-Districts and we took the easy way in Districts,” Zynda said. “Not a lot of teams we face have 20 kids with raw talent like we have. We definitely have the depth chart to go far and be successful.”

Austin’s biggest benefit from having a large roster is the pitching depth the team has. Post 1216 has 15 players that can give the team at least one inning and Conner said he didn’t even have to use the entire pitching staff over the last two weeks of the postseason.

Ideally, Austin would like to win four straight games and capture the state title, but it has the tools to rally back if it faces a loss.

“The goal is to win state,” Conner said. “You want to make a great showing, but you want to measure yourself against the strongest teams in the state.”

Austin’s Pete Conner is hoping Austin can finish what it started this summer.

Reller gets a hole in one at Meadow Greens

Roger Reller shot a hole in one at Meadow Greens Golf Course Monday. Reller aced the No. 12 hole with... read more