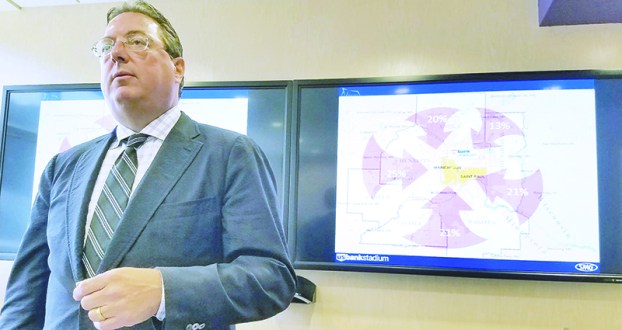 Vikings Vice President Lester Bagley talked about how the team has studied its fan base and where fans live to improve access to parking and U.S. Bank Stadium, at a press conference in Minneapolis on Wednesday. Tim Nelson/MPR News

MINNEAPOLIS — The Minnesota Vikings and U.S. Bank Stadium on Wednesday rolled out plans to get people to the stadium and back out of downtown, and the team said it’s figured out how to make tailgating work.

The new stadium will have a designated pickup zone for Uber and Lyft ride services. There are two areas for handicapped passengers to come and go. And if the light rail station right next to the stadium gets too full, there will be buses standing by to shuttle fans to other stops.

A bridge over the light rail tracks will keep the trains moving and fans away from the rails, and bicycle riders will find 188 bike racks on site.

Plans include a stadium app and an online parking feature that will guide fans to the 32,000 parking spots in the area, said Patrick Tulty, the stadium’s manager.

“We’re going to try to make it very easy, very interactive with the fans and with the guests, that they can log on, figure out the list of spots to park in and they can go to those spaces,” he told reporters.

The Vikings will offer parking packages for season ticket holders and single game buyers. And with skyway access to the stadium for the first time, fans can walk indoors all the way from the Minneapolis central business district, a comfort the old Metrodome couldn’t offer.

Vikings officials on Wednesday also said they’ve worked out a solution to fan tailgating outside the new stadium, where a giant new plaza, a new 4.2-acre park and a frenzy of building around the stadium has encroached on the surface parking that used to host game day gatherings around the Metrodome.

The Vikings have arranged to make a handful of nearby parking lots available before football games with more than 600 spaces for open air gatherings along Washington Avenue, said team Vice President Lester Bagley.

“The game day experience has obviously evolved with U.S. Bank Stadium, but there’s still a demand for traditional tailgating, and so we believe we’ve met that demand,” he said.

Despite all the upgrades, Bagley said fans will still need patience at first.

“Clearly, there’ll be a learning process for our fans and for everyone who comes to events here,” he said. “The good news here is that fans learn quickly. So after one or two or three games, they’ll get their routine down and they’ll figure out their traffic pattern, their parking spot, and how to get to their seat efficiently.”

The first NFL game at the new stadium is Aug. 28.

The Austin Post 91 Legion baseball team waited for a little rain to pass and then they put up their... read more