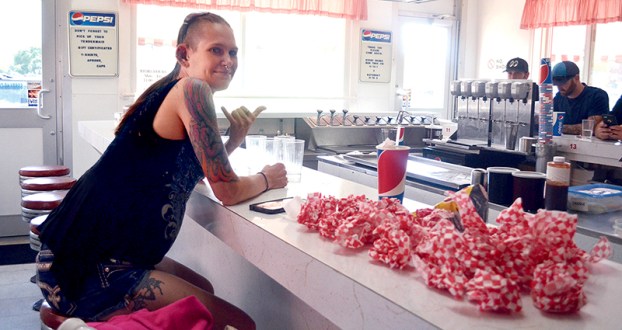 Molly Schuyler poses with her wrappers after beating the Tendermaid challenge. She ate 30 burgers, a malt, a bag of chips, and drank 80 ounces of water in less than 30 minutes. Photos by Alex Smith/alex.smith@austindailyherald.com

After consuming 30 burgers, 80 ounces of water, a bag of chips, a malt and thousands of calories, Molly Schuyler sat nonchalantly inside of Tendermaid Thursday afternoon.

Schuyler of California surpassed the Tendermaid challenge record by 13 burgers in 26 minutes, though she claimed to still have more room to eat.

Owners Sara and Gary White were not expecting the challenge to be broken by so much — and by someone so relaxed.

“It’s mind-blowing,” Sara said. “She was so casual and laid-back.”

Three minutes into the challenge, however, they knew they had a new record holder in the building. Schuyler chowed down nine burgers in three minutes. 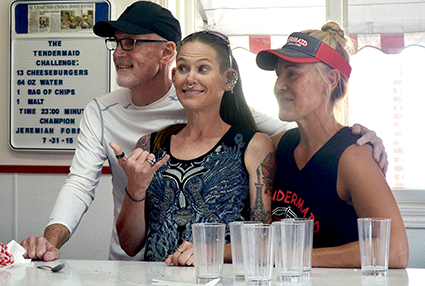 Schuyler is no stranger to food eating competitions. She has competed more than 300 times in both small and large scale challenges and is currently the number one ranked female independent competitive eater in the world, according to her official Facebook page. She has also appeared on TV shows like “Tosh.0” and “To Tell the Truth.”

While some may think she’d eat a little lighter after topping the Tendermaid challenge, Schuyler planned to take on another eating competition in Nebraska on Friday.

“I’m doing another challenge tomorrow,” she said with a grin on Thursday.

Dangerously high heat and humidity is settling into Minnesota. The National Weather Service has issued an excessive heat warning through... read more