The Mower County board is looking to hear the public’s opinion on the best way to fund its extensive infrastructure needs.

The board will hold a public hearing at 6 p.m. on Monday in the county board room, located in the lower level of the Mower County Government Center, to get residents’ thoughts on a proposed local half-cent tax.

The proposal would fund more than 40 specific road and bridge improvement project in the county over the next 10 years with the help of sales tax dollars, should the board eventually vote to approve the tax.

In 2013, the state approved a wheelage tax and a half-cent sales tax as options for counties to fund local road and bridge projects. In June of 2013, the Mower board approved a $10 wheelage tax, which is paid when drivers renew licenses. That was estimated to bring in $357,000 a year.

If the board votes to enact the half-cent sales tax, it would slim the county’s projected annual funding shortfall to $5 million a year, but it wouldn’t completely eliminate funding shortfalls.

The board is slated to vote to approve or reject the sales tax in August or early September. If approved, the sales tax would be implemented in January 2017.

Click here to see a list of road and bridge projects approved that could be completed using funds from a half-cent Mower County sales tax for roads, if the board approves the tax: https://www.austindailyherald.com/wp-content/uploads/sites/15/2016/07/PreliminaryRoads.pdf 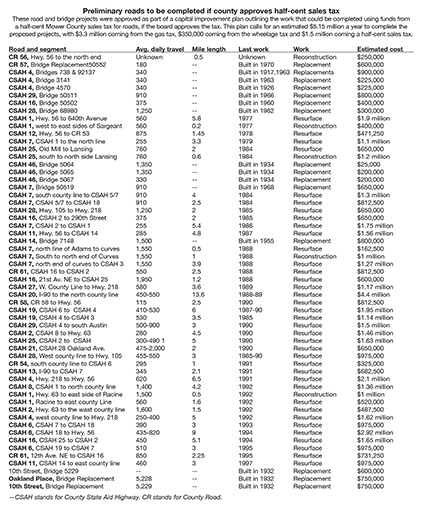 Families and children have an opportunity to get insight on what it’s like to be a police officer in Austin... read more