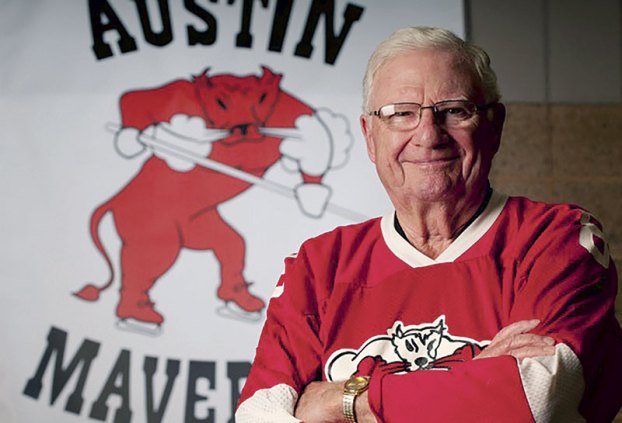 Jim Weber, one of the past owners of the Austin Mavericks, poses with a banner for the team that was recently hung at Riverside Arena. Photo provided

Mavericks banner goes up at Riverside

Fans might not have noticed, but there has been something missing lately when they watch Austin Bruins hockey games at Riverside Arena.

It’s a piece of history: the Austin Mavericks national championship banner from 1975-76.

The banner was won by the team coached by Lou Vairo, who would eventually coach the 1984 U.S. Olympic Hockey Team. It had hung in the area for decades and was part of the history of the arena, and no one knew where it went.

Mavericks fan and Austin native Vince Muzik got the ball rolling on getting the banner back up when he wrote Austin Parks, Recreation and Forestry Director Kim Underwood last September, asking if the arena would put up a new banner, if it were made.

Muzik said that Underwood and the board were enthusiastic about getting the banner back up.

The Mavericks began play in 1974-75 as part of the Midwest Junior Hockey League, then joined the U.S. Hockey League (USHL) in 1977 before departing for Rochester in the Spring of 1985. The USHL has blossomed since and now has 17 franchises in nine states across the Midwest. The Mavericks were owned by Austin hockey fan Jim Weber, who along with six other Austin men, brought the team to Austin.

With less than a month until Minnesota’s minimum wage increases for the third straight year, businesses in Austin and Albert... read more