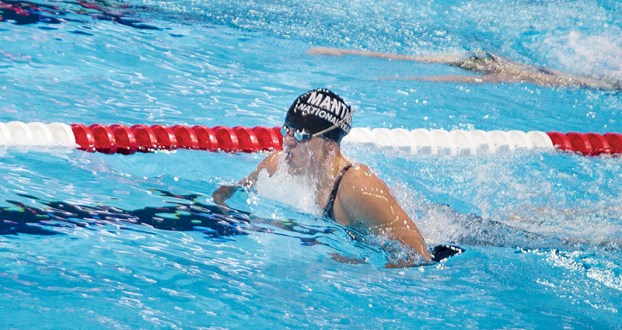 Horejsi misses out on semis of Olympic trials

While Horejsi won’t be competing in the 2016 Rio Olympics, she has more than plenty to be proud of.

Horejsi finished her second event of the week — the women’s 200-meter breaststroke — in 29th place out of 124 listed swimmers with a time of 2:31.41 mid-Thursday during the U.S. Olympic Trials at CenturyLink Center in Omaha, Nebraska. The top 16 advanced to Thursday night’s semifinals, with the top eight then advancing to today’s finals. Micah Lawrence finished first in the preliminaries with a time of 2:26.27.

It was Horejsi’s first time ever competing in the event at the Olympic Trials. At her 2012 Olympic Trials appearance, she competed in the 100-meter breaststroke alone.

“It was definitely more nerve-racking than my 100,” Horejsi said. “It’s my first time in my 200 at trials. … It’s a long race so you have a lot of time to get in your head. You just try to swim the best you can, and then whatever happens happens.” 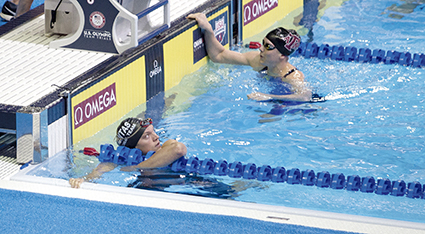 Despite the nerves, Horejsi wouldn’t trade her second Olympic Trials experience for anything.

“I liked swimming in the pool, of course; it’s a wonderful opportunity,” she said. “I’m relieved that it’s all done, but it’s kind of sad at the same time.”

Horejsi competed in the 100-meter breaststroke on Monday, and finished 19th out of 125 listed swimmers with a time of 1:08.82 in the preliminaries. After one swimmer was disqualified Horejsi’s place moved up to 18th, missing semifinals qualifications by just two spots. Horejsi placed 88th in the event at the 2012 Olympic Trials.

Lilly King ended up finishing first in the 100-meter breaststroke finals with a time of 1:05.20. According to a press release, King’s personal-best time is the fastest in the world in 2016 and 2015.

“The competition has gotten a lot faster, which is crazy — especially in the 100,” she said. “I think 1:07 low made the team last Olympic Trials, which 1:07.0 barely made top eight this time. That’s just crazy to think about how you constantly get faster, and you think about ‘how can people keep getting this fast?’”

As Horejsi now looks to focus on her collegiate swimming career at the University of Minnesota, she has no plans of stopping her quest for a spot on the U.S. Olympic team.

“That would be awesome,” she said. “It’d be after college and my collegiate season, so hopefully I’ll be at the peak of my career in swimming. We’ll have to see what happens.”

Horejsi said it has been a long road to get to where she is, and that the community support she has felt from Albert Lea and the surrounding area has made the journey that much better.

“It’s been a long week, but it’s been super fun,” she said. “I just want to thank all my coaches — from all the communities, from my high school coaches, from my CrossFit coach in Austin — and all the people that have helped out, and the support the community has given me, and my family — of course — are the most supportive people around. I mean, I couldn’t be here without all the support I’ve been given.”

The Minnesota Department of Transportation urges motorists to use extra caution while driving through highway work zones during the July... read more