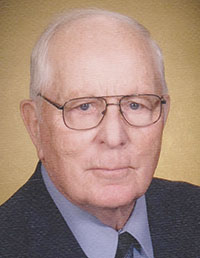 Harold Dean “Bud” Queensland was born on Sept. 26, 1929, son of Chris and Isabel “Ida” (Olson) Queensland at home near Marengo, Iowa. He was baptized at First Lutheran Church in Conroy, Iowa. In 1941 his family moved to Grand Meadow, Minnesota where they settled on a farm south of town. He was confirmed at Grand Meadow Lutheran Church, and graduated from Grand Meadow High School in 1947. He married Marjorie Noble at St. Olaf Lutheran Church in Austin, Minnesota. Together they raised their family on their farm south of Ostrander, Minnesota. Farming was Harold’s life’s work and hobby; and he shared his love for the land with his family. He planted his last rows in 2015. For many years he was also a DeKalb Seed dealer and served a large area. Harold enjoyed traveling from coast to coast and treasured time spent with his family, particularly his children, grandchildren, and great grandchildren. He was a member of Our Savior’s Lutheran Church in Spring Valley, Minnesota, for many years.

Funeral service will be held 2 p.m. Wednesday, July 20, 2016, at Our Savior’s Lutheran Church in Spring Valley, Minnesota, with Pastor Betsy Dartt officiating. Burial will be in the Bloomfield Cemetery Ostrander, Minnesota. Visitation will be held 5 to 7 p.m. on Tuesday, July 19, 2016, at the Hindt Funeral Home in Spring Valley and will continue for one hour prior to the service at the church.