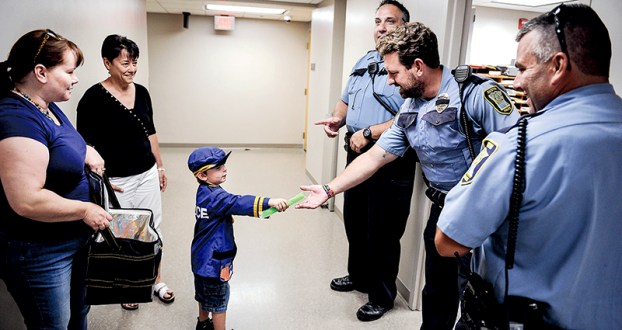 In a world of upheaval, a simple gesture can go a long way.

In the wake of a rash of shootings, including the ambush of three police officers in Baton Rouge, Louisiana, one young Austin boy decided he would say “thank you” to the Austin Police Department.

With his mother, Sheila Hanke, and a portable cooler of freeze pops in tow, 3-year-old Andrew Hanke visited the Law Enforcement Center Tuesday afternoon, handing out the treats to police officers.

“We had a garage sale and with his proceeds, he gets to decide how to spend it,” Sheila said as Andrew got a high-five from police officer Ryan Leaf and chatted with other officers.

His proceeds came from selling some of his baby toys, Sheila said. It’s all part of instilling in their son that being a good person is an everyday thing. 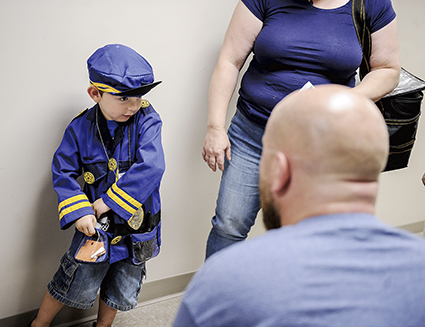 Andrew shows off his own police gear to an Austin Police officer.

“It’s part of the thing that we want to teach him,” she said.

For the police officers, the gesture is a positive note during a tense time for the nation’s police.

“With what has been going on in the nation, it’s gratifying to see a child sell his own stuff and do something nice,” Police Chief Brian Krueger said. “It’s greatly appreciated.”

Austin pool hosting swim meet this weekend; 1 of 4 meets in state this year

Some of the best swimmers in the state of Minnesota will compete at the Austin Municipal Pool this weekend. For... read more