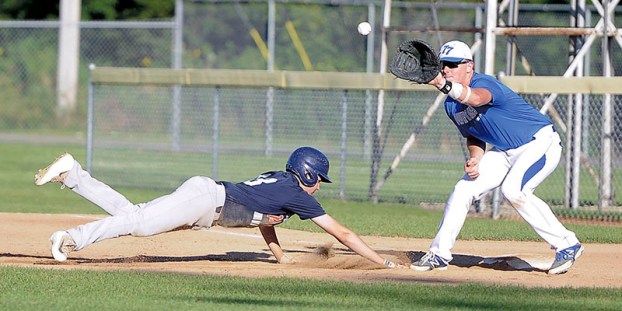 Tanner Steene dives back into first base on a pick-off attempt against Owatonn in a playoff match-up Tuesday night at Marcusen Park. Eric Johnson/photodesk@austindailyherald.com

The Austin Post 91 Legion baseball team put forth a complete effort to beat Owatonna 10-0 in seven innings in the first round of the District tournament in Marcusen Park Tuesday.

Jake Reinartz pitched six scoreless innings to pick up the win for Austin (16-6 overall) and Post 91 broke the game open when it scored seven runs in the top of the second. 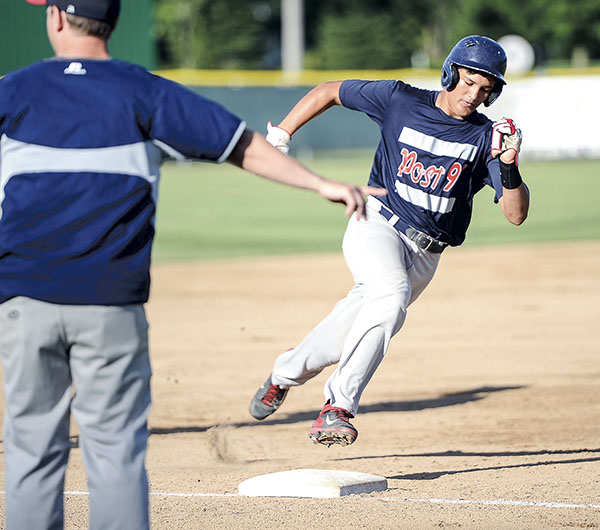 Phillip Zynda rounds third on the way to scoring against Owatonna in a playoff match-up Tuesday night at Marcusen Park. Eric Johnson/photodesk@austindailyherald.com

Austin broke out offensively when Jason Stoulil doubled in two runs, and Tanner Steene, Daniel Bollingberg, Alex Ciola, Nate Conner and Dylan Gasner, who was four-for-four with three RBIs, each had an RBI hit in the frame.

“When Dylan led off with a nice single, that started the ball rolling,” Bollinberg said. “When you see people in front of you get hits like that it raises your confidence more and more. Everyone in our lineup has the ability to hit the ball hard.”

Reinartz was in control for most of the game and he was able to pitch out of every threat that Owatonna posed. Owatonna had the bases loaded with two outs in the fifth and Reinartz came up with a big strikeout to preserve the big Post 91 lead.

“I had to reach back harder, throw harder and focus on hitting my spots. The catcher behind the plate [Gasner] knows what he’s talking about when it comes to that stuff. He knows how to get you out of a jam,” Reinartz said. “It was a big game, I was pumped up coming in.”

Austin racked up 12 total hits in the win and Reinartz struck out six. Austin co-head coach Joe Kroc was pleased with his team’s overall performance.

Austin’s Nate Conner relays a throw after getting the front end of a double-play in a playoff match-up against Owatonna Tuesday night at Marcusen Park. Eric Johnson/photodesk@austindailyherald.com

“Our swings were sort of locked in. We couldn’t have asked for a better first round game,” Kroc said. “You could see in pre game that guys were focused. It seems in any sport right now the Owatonna matchup just gets guys a little more amped. It was a great team effort.”

Austin will play either Albert Lea or the Rochester A’s in a District tournament game in Rochester Century 1 p.m. Thursday.

Hulne: Austin’s baseball boom will heat up this week

It’s been a big summer for baseball in Austin and with plenty of talent on the Post 91 Legion and... read more