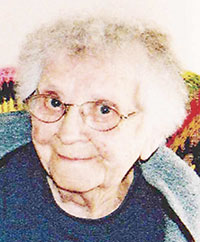 Agnes Viktora was born Feb. 2, 1914, in Pocahontas, Iowa, to Joseph and Anna Viktora. Raised in southeastern Minnesota, Agnes married Henry Zahradnik on June 2, 1936, in Spirit Lake, Iowa. The couple farmed, and Agnes was a homemaker. She also worked briefly at Hormel in Austin. She was an avid gardener.

She is survived by her son, Kenneth (Beverly) Zahradnik of Rochester; numerous grandchildren, great-grandchildren, and great-great grandchildren; a son-in-law, Paul Pettersen of Stockton, Minnesota; nieces, nephews, cousins, friends, and neighbors. She was preceded in death by her husband in 1988; a daughter, LaVonne Pettersen; son and daughter-in-law, Donald and Kay Zahradnik; and her five siblings.

Funeral services for Agnes Zahradnik will be at 11 a.m. on Wednesday, July 13, 2016, at Mayer Funeral Home in Austin. Burial will follow at Calvary Cemetery.

Friends may call one hour prior to the service at the funeral home. Online tributes are being welcomed and may be written at mayerfh.com.

MINNEAPOLIS — Police say investigators are making “promising strides” in their investigation into the shooting of two toddlers in Minneapolis,... read more